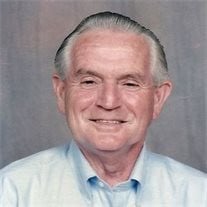 WINDSOR Albert "Jim" E. Miller entered into eternal rest after a lengthy illness on Sat., May 17 at 6:45 p.m. at his residence, with his family by his side, at the age of 77. He was the husband of Erma L. (Cleveland) Miller of Windsor. He was born in Pleasureville on May 19, 1936, son of the late Charles I., Sr. and Eleanor (Zech) Miller Jim worked at the former Cole-Steel for 35 years, then went to work at S&S Produce as a delivery man for 20 years, retiring in 2010. He was a member of Windsor Church of God in Windsor and Yorkanna Game and Gun Club. Surviving, besides his wife, Erma, are a daughter, Melissa L. Luckenbaugh and her husband Andrew of Red Lion; and a son, Scott W. Black and his wife Heather of Hellam; four grandchildren, Tamara Phillips of West York, Lindsey Luckenbaugh and Lauren Luckenbaugh, both of Red Lion and Marshall Black of York; two great-grandchildren, Jaydn Jacoby and Olivia Phillips, both of West York; numerous nieces and nephews. He was preceded in death by his three brothers, Charles I. Miller, Jr., Clyde Miller and Samuel Miller. Viewings will be held Wed. from 6 to 8 p.m. and Thurs. from 9 to 10 a.m. at Burg Funeral Home, Inc., 134 W. Broadway, Red Lion. A Service of Honor and Praise for Jim will be on Thursday at 10 a.m. at the funeral home. His minister, Pastor Anthony D. Zumbo, will officiate. Burial will be in Susquehanna Memorial Gardens. In lieu of flowers, contributions may be offered to York County SPCA, 3159 Susquehanna Trail North, York, PA 17406. Jim was a wonderful husband to Erma with whom he celebrated 48 years of marriage. They were married February 26, 1966. He was a great Father and Grandfather who enjoyed raising Bob White Quail, running his beagle and fishing. His family always came first and sharing what he loved with them. His goal in life was to make other people happy. If you knew him, you knew he succeeded!!! We will always remember your humor and will miss you greatly. In our hearts forever, love: Your Family. Online condolences may be offered at www.BurgFuneralHome.com

WINDSOR Albert "Jim" E. Miller entered into eternal rest after a lengthy illness on Sat., May 17 at 6:45 p.m. at his residence, with his family by his side, at the age of 77. He was the husband of Erma L. (Cleveland) Miller of Windsor. He was... View Obituary & Service Information

The family of Albert "Jim" E. Miller created this Life Tributes page to make it easy to share your memories.