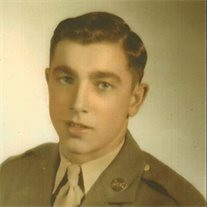 Alvin D. Brown of Windsor passed away on Friday, April 21, 2017 at The Haven at Springwood at the age of 93. He was the loving husband of Rosetta E. (Bowns) Brown, whom passed away in 2000. He was born on August 11, 1923 and was the son of the late John F. and Maude S. (Haldeman) Brown. Alvin was a United States Army Veteran, retiring after 20 years 18 days of service on Oct. 30, 1963 as a Master Sergeant. He served in the Army during WWII in Leyti Islands, Philippines and in Okinawa, Japan; he received an Award in Army Commendation Medal, Good Conduct Medal, Marksmen (Carbine), Philippines Liberation Medal with Two Bronze Stars. After Alvin's Career in military, he worked in Civil Service for the U.S. Federal Government; retiring in 1983, after many years of service. He was a longtime member of Grace Lutheran Church in Red Lion and a member of the American Legion, Post #543 in Red Lion and Red Lion VFW, Post # 1446, where he enjoyed attending many dances. He had a love for collecting coins, working on cars, and mowing the grass. Alvin leaves behind to cherish his memory, two daughters, Bonnie L. Fox and her husband John of Windsor; two grandchildren, Matthew Fox of Philadelphia and Michael Fox of Windsor; and Debra L. Julian and her husband, Hank of Kansas. He was preceded in death by five brothers and 1 sister. There will be a viewing on Wednesday, April 26th from 10-11 am at Burg Funeral Home, Inc, 134 W. Broadway, Red Lion. A Service of Honor and Praise for Alvin will begin at 11 am, Wednesday, at the funeral home with Pastor Ed Robbins, Interim of Grace Lutheran Church officiating. Burial will be at Susquehanna Memorial Gardens with full military rites offered by the York County Veterans Honor Guard. In lieu of flowers, contributions may be offered to Salvation Army; 1090 Haines Rd., York 17402. www.BurgFuneralHome.com

The family of Alvin D. Brown created this Life Tributes page to make it easy to share your memories.

Send flowers to the Brown family.