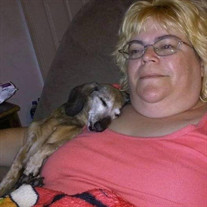 Amy Louise Fisher, of Red Lion, entered into rest on Tuesday, October 20, 2020 at 5:39am at Wellspan York Hospital at the age of 46. She was the companion of Kelly Snook with whom she shared 26 years together. She was born in Baltimore, Maryland on July 11, 1974 and was the daughter of David L. Fisher, of Dallastown, and Rose M. (Parsons) Fisher and step father David W. Baldwin of North Carolina. She was a graduate of Eastern Vo-Tech of Baltimore County, class of 1993. She worked at the former Key Plastics in Felton as a supervisor for several years. Amy enjoyed anything having to do with Walt Disney, playing video games and spending time with Kelly and her boys, Nicholas and Austin. In addition to her parents and Kelly, she was “mom-mom” to her sons Austin and Nicholas of Red Lion. She was one of four children, leaving behind her two sisters, Beth Parsons (Lonnie) of North Carolina, Rachel Fisher (Charles Shirley) of Tennessee, and her brother, David Fisher, of Louisiana, along with numerous aunts, uncles, cousins, nieces and nephews. Amy was preceded in death by her paternal grandparents, Everett & Maggie Yarber and Thomas L. Fisher, Sr, her maternal grandmother, Emo “Emma” Parsons-Mintz, who entered into rest in 2007 and with whom she shared a special bond, as well as her maternal grandfather, William Ralph Mintz who entered into rest on February 26, 1976. She was also preceded in death by her beloved Dachshund, Rosie. Cremation will take place with Burg Funeral Home, Inc., 134 W. Broadway, Red Lion. A memorial service of Honor and Praise for Amy will be scheduled and announced at a later date. Burial will be private and at the convenience of the family. Amy fought courageously and beat cancer with the help of a special treatment from St. Jude Children’s Hospital. She lived life to the fullest, giving all her attention to her boys and to Kelly. A recent reoccurrence of cancer had taken over her weakened condition. As she went from this life to Life Eternal, she was met with kisses and wagging tails from her beloved Dachshund Rosie and her family who passed before her. Amy was a wonderful person who was best described as being very nurturing, caring and willing to give to others in any way that she could. This is not goodbye because we will all see you again someday. We love you with all of our heart, your family. Memorial contributions may be offered to St. Jude Children’s Research Hospital, 501 St. Jude Place, Memphis, TN 38105 in memory of Amy because of the treatments offered when she was first diagnosed with cancer, allowing her to beat cancer, to share many more wonderful years with her family.

Amy Louise Fisher, of Red Lion, entered into rest on Tuesday, October 20, 2020 at 5:39am at Wellspan York Hospital at the age of 46. She was the companion of Kelly Snook with whom she shared 26 years together. She was born in Baltimore, Maryland... View Obituary & Service Information

The family of Amy L. Fisher created this Life Tributes page to make it easy to share your memories.

Send flowers to the Fisher family.