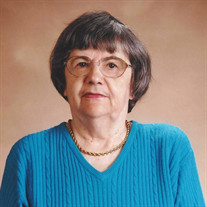 Arlene J. (Swope) Hanes, formerly of Mt. Wolf, entered into God’s care on Thursday, July 23, 2020, at 3:59 am at Manor Care York-North, at the age of 93. She was the daughter of the late Cyrus and Grace Verna (Lehman) Swope. She was born in Chanceford Township on February 16, 1927. Arlene was a homemaker. She enjoyed doing puzzles, reading, word books and spending time with her family. She leaves two sons, Larry E. Hanes of Florida and Bruce N. Hanes, and a daughter in law, Christine Hanes of Mt. Wolf. Arlene was the grandmother of Michelle Overmiller and her husband Dan of York, along with four other grandchildren and the great grandmother of three great grandchildren: Addison, Emily and Ryland Harpster. Arlene was one of eleven children. She is survived by two sisters, Thelma Gemmill of Manchester and Lois Miller of New Freedom and a brother, Carl Swope of Brogue, along with numerous nieces and nephews. She was preceded death by a son Lee A. Hanes, who entered into rest on April 4, 2015, her two grandchildren, Alysia Harpster on April 18, 2019, Matthew Hanes on August 7, 2015, and her seven siblings, Miriam Haugh, Merle S. Swope, Dale Swope, Charlotte Zink, John Swope, Lester Swope and Treva Fahs. All services for Arlene will be private and at the convenience to the family. Burg Funeral Home, Inc., 134 W. Broadway, Red Lion is assisting the family with the arrangements. Burial will take place at Susquehanna Memorial Gardens. Rev. David D. Tietje, pastor of St. John’s United Church of Christ in Red Lion will officiate at the service.

The family of Arlene J. (Swope) Hanes created this Life Tributes page to make it easy to share your memories.

Send flowers to the Hanes family.