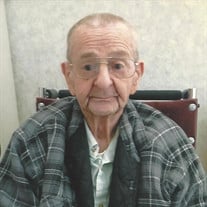 Arthur Eugene “Gene” Olphin, of York, entered into rest on Friday, September 13, 2019, at 11:01 am with his loving wife of 68 years by his side, at Manor Care Kingston Court, at the age of 86. He and Sara B. (Brown) Olphin of York were married on March 24, 1951. Gene was born in Craley, on December 28, 1932, and was the son of the late Ralph and Elsie E. (Runkle) Olphin. He was a sub assembler at Gishner’s Machine Company in Dallastown, retiring after ten years of service, and was also employed at the Red Lion Furniture Factory. He was United States Army Veteran, serving in the Korean War, from 1953 to 1955. Besides his wife, Sara, he has a daughter, Donna Jean Olphin of Hanover, a nephew, Paul Olphin and four nieces, Phyllis Fourhman, Betty Keller, RuthAnn Eaton and Elsie Reichard. He was preceded in death by his brother, Charles H. Olphin. Viewing for Gene will be on Wed., September 18th, from 7-9 pm at Burg Funeral Home, Inc., 134 W. Broadway, Red Lion. Cremation will follow and burial will be private and at the convenience of the family. God hath not promised skies always blue, flower-strewn pathways all our lives through. But God hath promised strength for the day, rest for the labor, light for the way, grace for the trials, help from above, unfailing sympathy and UNDYING LOVE. www.BurgFuneralHome.com

The family of Arthur Eugene "Gene" Olphin created this Life Tributes page to make it easy to share your memories.

Send flowers to the Olphin family.