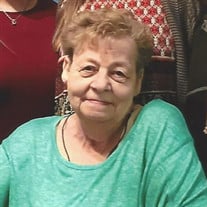 Audrey M. (Meyers) Shoff of Red Lion was welcomed to her Lord and Savior’s home on Wednesday, October 7, 2020, at 5:45 am at Manor Care Dallastown, at the age of 77. She was the wife of the late Samuel W. Shoff, Jr. who entered into rest on December 4, 1978 and the companion of the late Clarence L. Smith, Sr. who entered into rest on June 22, 2004. Audrey was born in York on February 12, 1943 and was the daughter of the late Woodrow and Mildred (Wallick) Meyers. She graduated from Red Lion High School, Class of 1961. She worked in cigar factories and some sewing factories around the area in earlier years, but her most important job was being a homemaker and taking care of her family. She enjoyed knitting, making crafts, baking and painting. She has three sons, Toby L. Shoff and his wife Kathryn of York and Terry L. Shoff and his wife Leanne of York, and Clarence Smith, Jr. of North East, MD., along with two daughters, Darlene M. Smith and her husband Robert W. King of Wildwod, NJ. , Veronica Casswell and husband Ronald of Galloway, OH. Audrey was the loving grandmother to Zachary, Lukas, Jordan, Chyanne, Kayli and great grandmother of seven step grandchildren and six step great grandchildren. She leaves two sisters, and an incredibly special niece who she was close to, Kimberly Woods of Dallastown, along with several other nieces and nephews. Audrey was preceded in death by two siblings. Viewing will be on Monday, October 12th, from 10-11 am at Burg Funeral Home, Inc., 134 W. Broadway, Red Lion. A Service of Honor and Praise for Audrey will begin at 11 am at the funeral home, with Rev. Joshua Wargo, pastor of Chapel Church in Red Lion, officiating. Burial will be at Susquehanna Memorial Gardens, following the service. As per our Governor, masks and social distancing will be observed. In lieu of flowers, contributions in memory of Audrey, may be offered to: York Health Foundation, Cancer Patient Help Fund, 50 North Duke St., Second Floor, York, PA 17401.

Audrey M. (Meyers) Shoff of Red Lion was welcomed to her Lord and Savior&#8217;s home on Wednesday, October 7, 2020, at 5:45 am at Manor Care Dallastown, at the age of 77. She was the wife of the late Samuel W. Shoff, Jr. who entered into rest... View Obituary & Service Information

The family of Audrey M. (Meyers) Shoff created this Life Tributes page to make it easy to share your memories.

Audrey M. (Meyers) Shoff of Red Lion was welcomed to her Lord...

Send flowers to the Shoff family.