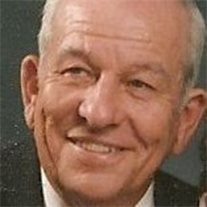 RED LION Ross B. Taylor, 91, entered into eternal rest at 4:40 a.m. Thursday, November 26, 2015, at Pleasant Acres Nursing and Rehabilitation Center. He was the husband of Ruth S. (Neff) Taylor, who entered into rest on June 12, 2000. He is survived by his companion, Laura Rickrode of Dallastown. He was born in Laurel, Pa., on July 13, 1924, son of the late J. Donnell and Martha E. (Bacon) Taylor. Mr. Taylor was a Security Guard at the former Catepillar, Inc. of York, where he worked for 32 and a half years, retiring in 1985. He was a United States Army veteran. He was a life member (since the age of 14) at Bethlehem (Stonepile) United Methodist Church in Red Lion, where he was active in the Sunday School, served two terms on the Board of Trustees, and served as the Chairman of Trustees. He was also a member of the American Legion Post 543 of Red Lion, National Rifle Association, and a former member of Craley Fish and Game. Surviving are a son, Duane D. Taylor and his longtime companion, Sharon Allen, both of Red Lion; two daughters, Denise E. Lenhart and husband, John of Red Lion, and Diane R. Shoff and husband, Les of Red Lion; four grandchildren, Danielle Tompkins and husband, Brett, Adam Hostetter, and twins, Michael and Luke Shoff, all of Red Lion; three great-grandchildren; a brother, Merle A. Taylor and wife, Alma of York; his sister, Betty Lou Neff and husband, David of Red Lion; several nieces and nephews; and his sister-in-law, Gladys Taylor of Red Lion. He was preceded in death by a sister, Hilda Goheen and her husband, Ken; and a brother, Dwight Taylor. Viewings will be held from 7 to 9 p.m. Monday, November 30, at Burg Funeral Home, Inc., 134 W. Broadway, Red Lion, and from 10 to 11 a.m. Tuesday, December 1, at Bethlehem (Stonepile) United Methodist Church, 250 Bethlehem Church Road, Red Lion. Service of Honor and Praise for Ross will begin at 11 a.m. on Tuesday at the church, with his pastor, the Rev. Thomas R. Osenbach, officiating. Burial will be at Bethlehem Stonepile U.M. Cemetery with full military rites by the York County Veterans Honor Guard. In lieu of flowers, contributions may be offered to Bethlehem Stonepile U.M. Church, or to the Covenant Food Pantry of the church, 250 Bethlehem Church Road, Red Lion, PA 17356. Ross was a loving father and grandfather and a great friend to many. He loved hosting gatherings with family and friends at his farm, fondly known as "Brookwood Hollow", with bands playing blue grass and gospel music which he enjoyed. He went hunting, fishing, and just appreciated the beauty of the outdoors. Online condolences may be offered at BurgFuneralHome.com

The family of Mr. Ross B. Taylor created this Life Tributes page to make it easy to share your memories.

Send flowers to the B. Taylor family.