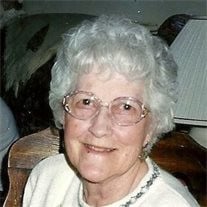 Barbara E. (Flaharty) Wambaugh YORK Barbara E. (Flaharty) Wambaugh entered into eternal rest after a lengthy illness on Wednesday, May 2, 2012, at 2:39 a.m. at her daughter's residence at the age of 88. She was the wife of Louis C. Wambaugh who entered into rest on May 11, 1998. Born in Collinsville on November 30, 1923, she was the daughter of the late Chester P. and Goldie I. (Howard) Flaharty. She worked at the former Naval Ordinance Plant and D&D Sewing Factory in Felton. She was a unit clerk at York Hospital retiring in 1989 after 16-1/2 years of service. Barbara was a longtime and active member of McKendree U.M. Church since 1943 and the York County Farm Women Group #21. Barbara is survived by a son, Terry L. Wambaugh and his wife Frances Dwyer of Crossville, Tenn.; a daughter, Susan E. Vadas and her husband Leonard of York; three grandchilden, Andrew Glenn, Joseph Glenn and Amanda Timchak; and three great-grandchildren, Karly, Calvin and Penelope Luna. A viewing will be held from 10 to 10:45 a.m. Monday, May 7, at McKendree U.M. Church, 3708 Delta Road, Airville. The service will be 10:45 a.m. Monday at the church with her pastor, Rev. David A. Walker, officiating. Burial will be in McKendree U.M. Cemetery. Burg Funeral Home, Inc., 134 W. Broadway, Red Lion, is handling the arrangements. In lieu of flowers, contributions may be made to McKendree U.M. Church, 3708 Delta Road, Airville, PA 17302.

The family of Barbara E. (Flaharty( Wambaugh created this Life Tributes page to make it easy to share your memories.