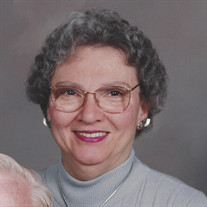 Barbara A. (Hess) Gaither, formerly of Red Lion, went home to be with her Lord and Savior and her late husband, on Saturday, December 1, 2018, at 3:20 am at Rest Haven York at the age of 86. She was the wife of the late Rev. Golden A. Gaither, who just entered into rest on September 7, 2018 to whom she spent 64 wonderful years of marriage. She was born in Harrisburg, on June 14, 1932 and was the daughter of the late Paul Oscar and Loretta Beatrice (Herr) Hess Lytle. Barbara went to John Harris High School, Class of 1950 and after graduation, she went to Lebanon Valley College, where she met Golden, and graduated in 1954. She earned her teaching degree at Lebanon Valley. She did some teaching and substituting over the years. She also was employed at Denstply International, and Allis Chalmers for a few years. She started playing the piano around age five and continued throughout her life. She was a Concert Pianist in high school with the band and played saxophone with the marching band. She learned to cook from her husband and was a wonderful baker, making many baked goods for the family over the years. Barbara loves ice-cream, and knitting for which she won ribbons from the York Fair. She was a very devoted wife to her husband, and a wonderful mother and grandmother. She was a member of Bethany United Methodist Church in Red Lion. She leaves behind two daughters, Rebecca L. Mentzer of York and her friend Steve Turkenkopf, and Yvonne D. Clutter and husband Ricky L. of Brogue and a son, Gregory P. Gaither of York. Barbara has four grandchildren, Chandra, Karrie, Derrick and Jamie, ten great grandchildren, and a great great granddaughter with another on the way. She leaves a cousin, Jack Bair and wife, in Enola and She was preceded in death by four children, Golden Gaither, Jr., Tanya Gaither and twin boys, Brian and Brent Gaither, two Aunts, Frances Pigman Simmons and Anna “ Peggy” Bair and a cousin, Herbert Bair. A Service of Honor and Praise for Barbara will be on Friday, December 7th at 11 am at Burg Funeral Home, Inc., 134 W. Broadway, Red Lion. Viewing will begin at 10 am to 11 am at the funeral home, with her pastor, Rev. Ronald L. Doverspike, officiating. Burial will be in Yoe Union Cemetery followed by an ice cream social luncheon in the fellowship hall of Bethany UM Church, address below. In lieu of flowers, contributions may be offered to: Bethany United Methodist Church, 121 W. Broadway, Red Lion, PA 17356. When tomorrow starts without me, don’t think we’re far apart, for every time you think of me, I’m right here in your heart, were I’ll stay until we meet again someday. www.BurgFuneralHome.com

Barbara A. (Hess) Gaither, formerly of Red Lion, went home to be with her Lord and Savior and her late husband, on Saturday, December 1, 2018, at 3:20 am at Rest Haven York at the age of 86. She was the wife of the late Rev. Golden A. Gaither,... View Obituary & Service Information

The family of Barbara A. (Hess) Gaither created this Life Tributes page to make it easy to share your memories.

Send flowers to the Gaither family.