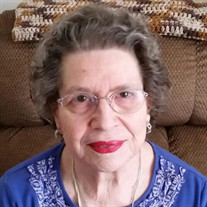 Barbara Ann (Rowe) Green, of York, entered into God’s care on Saturday, March 28, 2020, at 11 am at Hospice and Community Care in Mt. Joy, at the age of 83. She was the wife of the late Carey S. Green, Jr. who entered into rest on July 23, 2015. She was born in York on November 8, 1936, and was the daughter of the late Frederick John and Sylvia Grace (Bentz) Rowe. She was a graduate of York High School. Barbara was an insurance agent at the former Roy L. Geesey Insurance Company in York for many years. She was a longtime member of St. Paul’s United Methodist Church in Red Lion where she sang in the choir and she enjoyed painting and drawing. Barbara leaves her three children, Karen “Tig” S. Green of York, Phil C. Green of Dunellen, NJ, and Joyce E. Berger of Felton, along with her step daughter, Diane L. Koller and her husband David of Felton, a brother, Frederick J. Rowe, Jr. of Mountville, and nieces and nephews. She was preceded in death by a step son Vernon Koller on June 6, 2006. Due to the current restrictions with gatherings, cremation will take place with Burg Funeral Home, Inc., 134 W. Broadway, Red Lion. Graveside services to inter the cremains will be at Susquehanna Memorial Gardens, at a later time and date, which will be announced. The family has asked for contributions to be offered to: York Health Foundation, Cancer Patient Help Fund, 50 N, Duke St. Second Floor, York, PA 17401, in lieu of flowers.

The family of Barbara Ann (Rowe) Green created this Life Tributes page to make it easy to share your memories.

Send flowers to the Green family.