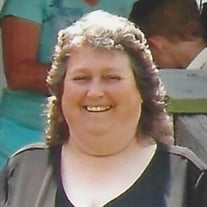 Barbara A. (Smith) Taylor, of Red Lion, went from Life to Life Eternal at Manor Care North on Monday, July 5, 2021 at 12:15PM at the age of 65. She was the wife of the late Donald E. Taylor who entered rest on December 25, 2016. Barbara was born in Red Lion on August 18, 1955 and was the daughter of Helen M. (Mitzel) Taylor, of Red Lion, and the late Edward C. Smith. She was also the stepdaughter of the late Francis Taylor. She was a graduate of Red Lion High School, class of 1973 and was a homemaker. She enjoyed going to Lion’s Pride for breakfast, listening to Elvis and country music, watching Westerns, specifically Bonanza and The Virginian. She was fond of NASCAR, specifically Jeff Gordon, but most importantly enjoyed spending time with her grandchildren. Besides her mother, she is survived by her two sons, Bradley A. Smith and wife, Sadye, of Windsor and Brandon D. Taylor of Red Lion, as well as her two grandchildren, Elila A. and Sawyer A. Smith. She is also survived by her siblings, Karla Tompkins and husband, Larry, of Red Lion, Brian Taylor and wife, Robin, of Dover, Brent Taylor and wife, Carla, of Red Lion, and Tiffany Slotnik and husband, Michael, of Georgia, as well aunts, uncles, cousins and numerous nieces and nephews. A viewing for Barbara will be on Tuesday, July 13, 2021 from 12-1 PM at Burg Funeral Home, Inc., 134 W. Broadway, Red Lion. A Service of Honor and Praise will begin at 1 PM with Ryan Smith, of Great Reward Ministries, officiating. Burial will take place at Susquehanna Memorial Gardens following the service. Contributions may be offered in Barbara’s memory to: Hope for Depression Research Foundation, 40 West 57th Street, Suite 1440, New York, NY 10019.

The family of Barbara A. (Smith) Taylor created this Life Tributes page to make it easy to share your memories.

Barbara A. (Smith) Taylor, of Red Lion, went from Life to Life...

Send flowers to the Taylor family.