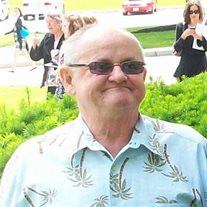 Barry Dale Smeltzer, 75, formerly of Red Lion, entered into rest unexpectedly at 5:01 a.m. Thursday, June 14, 2012, at Lancaster General Hospital. He was the husband of Patricia A. (McKinley) Smeltzer, whom he married January 1, 2012, and Geraldine M. (Kling) Smeltzer, who entered into rest on November 27, 2009. He was born in York, on April 28, 1937, and was the son of the late Theodore R. and Glen Louise (Grimm) Smeltzer. Mr. Smeltzer was a machine operator at Dunlap Products, retiring after 34 years of service. He attended Emmanuel Christian Fellowship in York. He was a U.S. Army veteran who graduated from Red Lion High School Class of 1955, and he was an avid hunter. In addition to his wife, Patricia, he is survived 1 daughter, Arlette L. Baptisti of York and fiance', Kenneth Stine; one grandson, Matthew Baptisti of Lancaster and fiancee', Alicia Wilson; two stepsons, Bryan L. Grove of Dover (Debbie) and Blaine L. Grove of Thomasville (Jodi); three stepdaughters, Sandra J. Kral of Red Lion (David), Sherri Grove of Red Lion, and Shelley Grove of Legrange, Ga.; and eight stepgrandchildren. There will be no viewing. Cremation will take place with Burg Funeral Home, Inc., 134 W. Broadway, Red Lion. Burial will be at the convenience of the family. In lieu of flowers, contributions may be offered to St. Annes Retirement Community, 3952 Columbia Ave., Columbia, PA 17512. Barry was a wonderful Dad and grandfather. He is remembered as being "Full of Life". He loved sharing and doing things for others. He was a very happy man, always putting others needs before those of his own, making others happy too!

Barry Dale Smeltzer, 75, formerly of Red Lion, entered into rest unexpectedly at 5:01 a.m. Thursday, June 14, 2012, at Lancaster General Hospital. He was the husband of Patricia A. (McKinley) Smeltzer, whom he married January 1, 2012, and Geraldine... View Obituary & Service Information

The family of Mr. Barry Dale Smeltzer created this Life Tributes page to make it easy to share your memories.

Send flowers to the Smeltzer family.