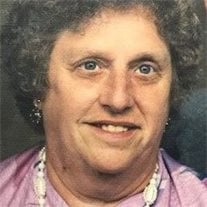 Beatrice P. (Snyder) Ruby, of Red Lion, entered into rest on Tuesday, December 5, 2017 at 9 pm at her residence at the age of 83. She was the loving and devoted wife to her late husband, John F. Ruby, Sr. who entered into rest on September 1, 2007. She was born in York on January 27, 1934 and was the daughter of the late Howard C. and Estella (Smeltzer) Snyder. She was formerly from Snyder's Corner in Red Lion. Beatrice was a homemaker and also a farmer. She worked in a sewing factory and at Flinchbaugh Products. She went to a one room school in Red Lion, earning her diploma after 12 years. She was the loving mother of three sons, John F. Ruby, Jr. and his wife Lana of York, Charles "Chuck" E. Ruby of Red Lion and Randy L. Ruby and his wife Wendy of York. She is the grandmother to Tonya Morgan and her husband Mike of Windsor, Chad Ruby and his wife Jess of York, Steven Ruby of Harrisburg, Randy Ruby, Jr. and his wife Brittany who is currently in the military, stationed in Ft. Sam Houston, Nevada Ruby of York and her granddaughter in law, Kathy Ruby of Brogue She is the great grandmother to thirteen great grandchildren and has another on the way. She had several nieces and nephews. She was preceded in death by her grandson, Jonathan Ruby who entered into rest in December of 2010. Viewings will be on Sunday, December 10th from 6-8 pm and Monday, Dec. 11th from 9:30 to 10:30 am at Burg Funeral Home, Inc., 134 W. Broadway, Red Lion. A Service of Honor and Praise for Beatrice will begin at 10:30 am on Monday at the funeral home with Pastor Paul Dauenbaugh, of Pleasant View Brethren in Christ Church in Red Lion officiating. Burial will be in Prospect Hill Cemetery. In lieu of flowers, you may make a contribution in Beatrice's memory to: Pleasant View Brethren in Christ Church, 434 E. Lancaster, St., Red Lion, PA 17356. Beatrice was a devoted wife to her husband who was her first love. She was a wonderful mother and grandmother. She had a very kind heart and was a sweet, loving person. She treated everyone she met equally and was very straight forward with her opinions, but then open to hear those of others. One night a man had a dream. He dreamed he was walking along the beach with the Lord. Across the sky flashed scenes from his life. For each scene, he noticed two sets of footprints in the sand; one which was his, the other the Lord. During your times of trial and suffering, when you see just one set of footprints, always remember that it is then that the Lord carried you. Forever in our hearts.

Beatrice P. (Snyder) Ruby, of Red Lion, entered into rest on Tuesday, December 5, 2017 at 9 pm at her residence at the age of 83. She was the loving and devoted wife to her late husband, John F. Ruby, Sr. who entered into rest on September 1,... View Obituary & Service Information

The family of Beatrice P. (Snyder) Ruby created this Life Tributes page to make it easy to share your memories.