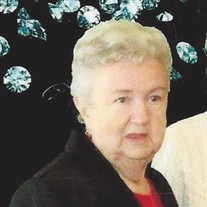 Bernice “Toots” M. (Saylor) Markel, of Windsor, entered into God’s care, after a brief illness, on Thursday, March 7, 2019 at 12:04 pm at Wellspan York Hospital at the age of 81. She was the wife of the late Benjamin F. Markel who entered into rest on February 3, 2006. Toots was born in New Bridgeville on February 7, 1938 and was the daughter of the late Howard H. and Helen K. (Hershey) Saylor and the step daughter of the late Luther Saylor. She worked at Zero Restriction, retiring in 2008 after many years of service, and prior to that at the former Roanna Girl Sewing factory. She was a member of Emmanuel United Methodist Church in Windsor and volunteered with the Emmanuel Food Pantry of Windsor. She also volunteered with the American Heart Association and the American Cancer Society. Bernice leaves a son, Wade A. Markel and his partner, William Major, of Hellam and a daughter, Tammy L. Markel and her companion, Randall of Wrightsville. She has one grandson, a brother, Palmer Saylor of York and three sisters, Kathryn Grove of York, Diane Watson of MD and Cindy Klopp of York, along with numerous nieces and nephews. She was preceded in death by her twin granddaughters, Alicia and Aletha in 2000, four brothers, and two sisters. Viewings for Toots will be on Tuesday, March 12th, from 6-8 pm and Wednesday, March 13th, from 9:30 to 10:30 am at Burg Funeral Home, Inc., 134 W. Broadway, Red Lion. A Service of Honor and Praise of Toot’s life will begin at 10:30 am at the funeral home, with her pastor, Rev. Harold E. Snyder officiating. Burial will take place at Susquehanna Memorial Gardens. In lieu of flowers, contributions may be offered to: Emmanuel Food Pantry of Windsor, 434 Bull Run Road, Wrightsville, PA 17368 or to the American Heart Association, c/o York Heart Walk, 4250 Crums Mill Road, Suite 100, Harrisburg, PA 17112. Toots is remembered as being a wonderful mother, who had a great sense of humor, and who was a very generous, kind and giving. She was an independent, strong willed person. “My precious child, I love you and I would never leave you. During you times of trial and suffering, when you see only one set of footprints, it was then that I carried you.” www.BurgFuneralHome.com

The family of Bernice "Toots" M. (Saylor) Markel created this Life Tributes page to make it easy to share your memories.