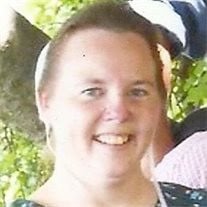 Bethany L. (Keeny) Keeney, 38, entered into eternal rest at 5:05 p.m. Sunday, June 21, 2015, at York Hospital. She was the wife of John R. Keeney. She was born in Hanover, on November 10, 1976, and was the daughter of Fred E. and Kathy B. (Hilty) Keeny of Glen Rock. Beth was a homemaker and former proprietor of Pretty Pickins Stand at the Markets at Shrewsbury. She also sold Tupperware. She was a member of the Dunkard Brethren Church in Shrewsbury. In addition to her husband and parents, she is survived by nine children, Hannah Beth Keeney, Jonathan Andrew Keeney, Devon Wade Keeney, Galen Randal Keeney, Heidi Michele Keeney, Ginger Nicole Keeney, Holly Noelle Keeney, Aydin Patrick Keeney, and Cameron Riley Keeney, all of Seven Valleys; a brother, Jared A. Keeny (Shelly) of New Freedom; a sister, Heather D. Kreider (Jason) of Glenmore; paternal grandfather, Lloyd M. Keeny, and her stepgrandmother, Catherine Keeny, both of Fawn Grove.; and numerous aunts, uncles, cousins, nieces, nephews, and friends. Viewings will be held from 6 to 8 p.m. Thursday and from 9 to 10 a.m. Friday at Grace United Methodist Church, 473 Plank Road, New Freedom. Burg Funeral Home, Inc., 134 W. Broadway, Red Lion, will be assisting the family with the arrangements. A Service of Honor and Praise for Bethany will be on Friday at 10 a.m. at the church with Elders Merle E. Sweitzer and Robert S. Lehigh officiating. Burial will be at Dunkard Brethren Cemetery. In lieu of flowers, the family has requested contributions be offered to John R. Keeney (to be used to care for her children), 1404 Ridgeview Road, Seven Valleys, PA, 17360. Bethany and John married on November 5, 1995, celebrating 19 years of marriage. She was a loving and caring wife, a very devoted mother to her children, and a wonderful daughter and friend to many. She loved animals, sewing, reading, and enjoyed Stampin Up. Perhaps my time seemed all too brief. Don't lengthen it now with undue grief. Lift up your hearts and share with me. God wanted me now, He set me free. IN OUR HEARTS FOREVER. www.BurgFuneralHome.com

The family of Bethany L. (Keeny) Keeney created this Life Tributes page to make it easy to share your memories.