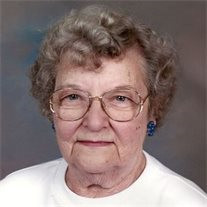 Betty M. (Leber) Abel, 92, entered into rest at 2:55 p.m. Thursday, May 9, 2013, at Lancaster General Hospital. She was the wife of Harry D. Abel, Jr., who entered into rest on November 9, 1991. She was born in York, on June 19, 1920, daughter of the late Levere P., Sr. and Ruth (Baker) Leber. Betty was a homemaker. She worked for various cigar factories before working at Dentsply. She later worked at Kauffman's Bake shop. She was a longtime active member of Zion United Methodist Church in East Prospect, where she served as the church puppeteer, helped with the missionary group, was a Sunday school teacher, and assisted with Wednesday evening services for the children. She also loved to sing in the choir. Betty was a member of the Farm Women's Group #25, East Prospect Fire Co. Ladies Auxiliary, and she helped at the Canadochly Valley Ambulance Club with turkey dinners. Surviving are her son, Baron E. Abel and wife, Sandy of Wrightsville; three grandchilden, Lacey C. Urban and husband, Kenneth of Virginia Beach, Va., and Logan D. Abel and Liddy E. Abel, both of Wrightsville; one great-granddaughter, Elizabeth Urban; two brothers, Keith Leber and wife, Mary of Delaware, and Gene Leber and wife, Susan of Maryland; two sisters-in-law, Lois Leber of Delroy and Shirley Leber of Virginia; and numerous nieces and nephews. She was preceded in death by two brothers, Levere "Bill" P. Leber, Jr. and Donald B. Leber. There will be a viewing from 10 to 11 a.m. Tuesday, followed by an 11 a.m. service at Zion U.M. Church, 1 N. Main St., East Prospect 17317. Her pastor, the Rev. Albert R. Horst, will officiate. Burial will be at East Prospect Riverview Cemetery. Burg Funeral Home, Inc., 134 W. Broadway, Red Lion, is handling the arrangements. In lieu of flowers, contributions may be offered to Zion U.M. Church, 1 N. Main St., East Prospect, PA 17317; or to East Prospect Fire Co., 11 W. Ridge Ave., East Prospect, PA 17317. Betty was a devoted mother, grandmother, and great-grandmother who adored spending time with her family. She always remembered others in sending cards. She will be sadly missed by all who knew and loved her. Online condolences may be made at www.BurgFuneralHome.com

The family of Betty M. Abel created this Life Tributes page to make it easy to share your memories.

Send flowers to the Abel family.