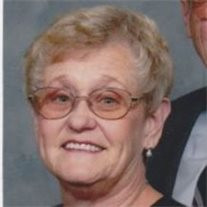 Betty Jo (Anderson) Ness, formerly of Red Lion, entered into eternal rest after a long fight from a stroke on Wednesday, June 1, 2016 at 11:35 p.m. at home with her family in Bumpass, Va. at the age of 80. She was the wife of the late Kenneth L. Ness, who entered into eternal rest on June 10, 2014.Betty was born in Mountain View, VA on August 11, 1935, and was the daughter of the late Frank and Eloise (Mallory) Anderson. Betty had several careers prior to retiring from JKJ Chevrolet in 1991 after working 17 years as an assistant parts manager. Betty and Ken shared a double wedding with her daughter Diann and husband Don on August 10, 1985. Together Betty and Ken have camped in 48 of the 50 states over the years. She was a fantastic mother, grandmother and great-grandmother. Survivors include 4 children, Wanda (Dowdy) Turner and her husband Wayne of Bumpass, VA, Diann (Dowdy) Berger and her husband Donald of Bumpass, VA, Brenda (Dowdy) McClanahan of Manassas, VA, and Roger Dowdy and his wife Debi of Arvada, CO.; six grandchildren, Kelli Austin and her husband Kevin of VA, Gregory Pack and his wife Michelle of VA, Dan McClanahan and his wife Michelle of FL, Joey Payne and his wife Melissa of AL, Cynthia McClanahan of VA, Denis Dowdy and his wife Hannah of CO; 13 great-grandchildren; 2 stepchildren, Kenneth L. Ness, Jr. and his wife Maria of MD and Donna J. (Ness) Straley of MD; four step grandchildren; six step great-grandchildren; numerous nieces, nephews, and cousins. She was preceded in death by her sister, Bobbi Smith; and her two brothers, Alfred and Charles Anderson; and step son-in-law, James Straley. Family and friends may extend their condolences on Friday, June 17, 2016 at the visitation from 12-1 p.m. Service of Honor and Praise for Betty will begin on Friday, June 17, 2016 at 1 p.m. at Burg Funeral Home, Inc., 134 W. Broadway, Red Lion. Rev. David D. Tietje, pastor of St. John's United Church of Christ, will officiate. Burial will be at Freysville Zion United Methodist Cemetery. In lieu of flowers, contributions may be offered to American Stroke Association.Org., 7272 Greenville Ave., Dallas, TX 75231. The family would like to extend a special thank you to Betty's care nurse, Katie Knightly of VA for all her love and devotion over the last year. Betty will be greatly missed by all who knew and loved her. www.burgfuneralhome.com

Betty Jo (Anderson) Ness, formerly of Red Lion, entered into eternal rest after a long fight from a stroke on Wednesday, June 1, 2016 at 11:35 p.m. at home with her family in Bumpass, Va. at the age of 80. She was the wife of the late Kenneth... View Obituary & Service Information

The family of Betty Jo (Anderson) Ness created this Life Tributes page to make it easy to share your memories.