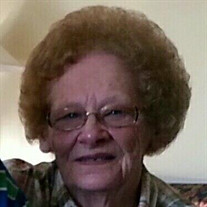 Betty H. (Dietz) Knaub, of Windsor, entered into God’s care on Thursday, December 6, 2018 at her residence, at 5:20 pm at the age of 90. She was the wife of the late Clair E. Knaub who entered into rest on October 31, 1984. She was born in East Prospect, on February 10, 1928 and was the daughter of the late Lincoln Burg and Helen Mae (Beaverson) Dietz. She attended East Prospect School and worked for D.F. Stauffer Biscuit Company for 50 years, (this was her only job), of which twenty years she was a packer and thirty years she worked as a supervisor, retiring in 1998. Betty was a longtime member of Emmanuel United Methodist Church in Windsor, a member of the Windsor Fire Company and she also volunteered helping out with feeding the homeless in York. She was a very loving and sweet person and she enjoyed spending time with her family. She leaves a son, Rick E. Knaub of York and two grandchildren, Alisa J. Aguillon of York and her companion Austin Miller and Daniel W. Knaub of York. She was the great grandmother to Madigan Aguillon and Sophia Miller, and she also has numerous nieces and nephews. Betty was preceded in death by her grandson, David C. Knaub in 2010, a grandson in law, David Aguillon in 2013, her daughter in law, Anna D. (Amoros) Knaub in 2012, and her four siblings, Richard Dietz, Mahlon Dietz, Dorcas Dietz and Orpha Frey. Visitation will be on Tuesday, December 11th from 9:30 to 10:30 am at Burg Funeral Home, Inc., 134 W. Broadway, Red Lion. A Service of Honor and Praise for Betty will begin at 10:30 am at the funeral home with her pastor, Harold E. Snyder, officiating. Burial will be in Susquehanna Memorial Gardens. In lieu of flowers, contributions may be offered to Betty’s two favorite charities, Emmanuel UM Church, PO Box 341, Windsor, PA 17366 or to Margaret Moul Home, 2050 Barley Road, York, PA 17408. www.BurgFuneralHome.com

The family of Betty H. (Dietz) Knaub created this Life Tributes page to make it easy to share your memories.

Send flowers to the Knaub family.