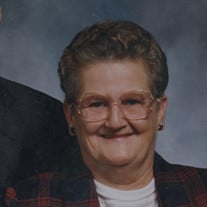 Betty R. (Fager) Stambaugh, of Dallastown, passed away peacefully in the afternoon on Friday, December 10, 2021 at the age of 85 while she was surrounded by her family. She was the wife of the late Roland Stambaugh who entered into rest on May 24, 2003. She was born in Stewartstown on January 15, 1936 and was the daughter of Elmer Fager and Helen Jamison. Betty spent her youth on the farm in Stewartstown. She shared many stories with all the children about what it was like to live on the farm and how hard things were “back in the day.” She and Roland settled in Red Lion and started a family where they had five children: Cheryl (Stambaugh) Moul, Randy Stambaugh and wife, Sandy, and Rick Stambaugh and wife, Kris. Betty was preceded in death by her two daughters, Crystal and Debbie Stambaugh. Betty leaves behind her nine grandchildren: Darrell Knaper, Rachel (Roberts) Bortner, Ashley (Stambaugh) Ellis, Michael Roberts, Mark Stambaugh, Josh Moul, Jenny (Stambaugh) Geiselman, and Andrew Stambaugh. In addition, she had eight great grandchildren, four great great grandchildren. She had the privilege to be part of five generations twice in her lifetime. She was a devoted wife and mother to all her children. She was active with the Red Lion School Band and Boy Scouts with her children. She most enjoyed spending time with all her grandchildren and great grandchildren. To those that knew her best, she said that she was going to go kicking and screaming and to us she did. She was also preceded in death by her sister, Mary (Fager) Hersey. A viewing for Betty will take place on Thursday, December 16, 2021 from 9:30 to 11 AM at Burg Funeral Home, Inc., 134 W. Broadway, Red Lion. A Service of Honor and Praise for Betty will begin at 11 AM with Dr. Keith Braucher, of Stewartstown United Methodist Church, officiating. Burial will take place at Red Lion Cemetery. In lieu of flowers, please donate to the Pennsylvania Special Olympics: Special Olympics, Attn: Web Gifts, 1133 19th Street NW, 12th Floor, Washington, DC 20036 or to the Red Lion VFW Post Post #1446: 815 S. Main Street, Red Lion, PA 17356 or the Red Lion American Legion #543: 23 E. Broadway, Red Lion, PA 17356.

Betty R. (Fager) Stambaugh, of Dallastown, passed away peacefully in the afternoon on Friday, December 10, 2021 at the age of 85 while she was surrounded by her family. She was the wife of the late Roland Stambaugh who entered into rest on... View Obituary & Service Information

The family of Betty R. (Fager) Stambaugh created this Life Tributes page to make it easy to share your memories.

Send flowers to the Stambaugh family.