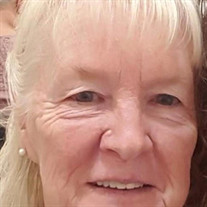 Betty M. (Burkins) Scott, of Felton entered into her forever home on Thursday, February 17, 2022, at 11:45 am at UPMC Pinnacle at the age of 77. She was the wife of Robert E. Scott, Sr. to whom she married on November 13, 1967, celebrating 55 years together. She was born on January 6, 1945 and was the daughter of the late Russell and Gladys (Holloway) Burkins. Betty was a homemaker, babysitting her grandchildren and great grandchildren. She attended the Living Word Church and the Red Lion Assembly of God Church. She enjoyed going to the beach and watching her son at dirt track racing, but most of all, she loved spending time with her family. Betty leaves her husband Robert, her sons, Robert E. Scott, Jr. (Brandie) of Felton, George Windon of Dover, and James Scott (Bonnie) of Red Lion, along with a very good friend who is like her son, Robert Lamond (Melody) of Red Lion. She was the grandmother of nine grandchildren, Jessica O’Sheehan (Tim) of York Haven, Jennifer Horan (Travis) of Dover, Amy Scott (Austin Reed) of Etters, Heather Sieple (Kyle) of Windsor, Cindy Windon, Hailey Windon both of Felton, Robert Lamond, Jr. (Ashley), Rodger Graser, Summer Scott and Jasmine Wertz, and seven great grandchildren. Betty also leaves a sister, Joan Noseworthy (Bear) of Dover. She was preceded in death by her daughter, Sandra Rebuck and a grandson, Rodger Graser, Jr. Cremation took place with Burg Funeral Home, Inc., 134 W. Broadway, Red Lion. A Memorial Service to Honor and Praise Betty’s life will be on Wednesday, February 23rd, at 7 pm at the funeral home. Visitation will be from 6-7 pm, with her very dear friend, Rev. Robert Lamond, officiating. Burial will be private and at the convenience of the family. In lieu of flowers, contributions may be offered to: York County Racing Club, 4250 N. Susquehanna Trail, York, PA 17404. Online condolences may be offered at: wwwBurgFuneralHome.com

The family of Betty M. (Burkins) Scott created this Life Tributes page to make it easy to share your memories.

Betty M. (Burkins) Scott, of Felton entered into her forever...

Send flowers to the Scott family.