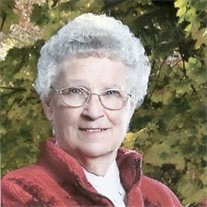 Betty Jean (Snyder) Shirey of Dover went home to be with her Lord and Savior in heaven on Friday, June 20, 2014, at 2:14 a.m. at Providence Place Retirement Community in Dover at the age of 80. She was the wife of Donald Eugene Shirey of Dover, to whom she married on August 25, 1956 in Marcus Hook, Pa. They were happily married for 57 years. Betty was born in Lock Haven on August 14, 1933, daughter of the late James and Mary L. (Gummo) Snyder. Betty grew up in Chester and graduated from Chester High School Class of 1951. After high school, she attended the former Lancaster School of the Bible, graduating in 1956. Her last place of employment was at Lancaster Bible College where she served for 14 years as an Administrative Assistant in the Business Office. She retired from that position two years ago. She was a longtime member of The Church of the Open Door in York. Survivors include her husband, Donald of Dover; four sons, Donald Edward Shirey and wife Barbara of Lancaster, Daniel Scott Shirey and wife Janet of Dover, Thomas Eugene Shirey of East Prospect, and Timothy Lee Shirey and wife Sue of Holderbank, Switzerland; nine grandchildren; nine great-grandchildren; two brothers, Dean Snyder and James Snyder, both of California; two sisters, Alice Buckland of West Virginia and Dorothy Becker of Philadelphia; numerous nieces and nephews. She was preceded in death by four brothers, David, Harry, Kenneth and George. There will be no viewing. Burg Funeral Home, Inc., 134 W. Broadway, Red Lion, will be assisting the family with the arrangements. Family and friends are invited to extend their condolences on Saturday, June 28 from 10 to 11 a.m. at The Church of the Open Door, 8 Carlisle Court, York. A Memorial Service of Honor and Praise for Betty will begin at 11 a.m. on Saturday at the church. Her Associate Pastor, the Rev. Donald Wagner will officiate. Burial will be private in Mt. Rose Cemetery and at the convenience of the family. In lieu of flowers, contributions may be offered to: www.CEFonline.com, please designate to CEF European Regional Office; or to: Lancaster Bible College at www.lbc.edu/giving. Betty was dedicated to her family and was very proud of her children and grandchildren. Her true love for her Lord could be seen in all aspects of her life. She will be sadly missed by many. Online condolence may be offered at BurgFuneralHome.com. To view A Celebration of Life video please visit: http://www.illustratedword.com/download/videos/Betty_Shirey_video_MQ.mp4

Betty Jean (Snyder) Shirey of Dover went home to be with her Lord and Savior in heaven on Friday, June 20, 2014, at 2:14 a.m. at Providence Place Retirement Community in Dover at the age of 80. She was the wife of Donald Eugene Shirey of Dover,... View Obituary & Service Information

The family of Betty Jean Shirey created this Life Tributes page to make it easy to share your memories.

Betty Jean (Snyder) Shirey of Dover went home to be with her...

Send flowers to the Shirey family.