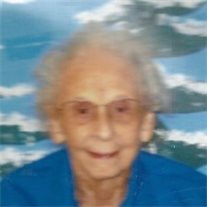 Beulah "Bea" E. (Eyster) Bowes entered into rest on Sunday, February 17, 2013 at 11:45 a.m. at Country Meadows of York after a brief illness at the age of 95. She was the wife of Charles L. Bowes, who entered into rest on April 5, 2009. Born in Sunbury on September 28, 1917, she was the daughter of the late Lewis A. and Beulah W. (Wirt) Eyster. She was an Administrative Assistant. During her working years, she worked as Dean of Men at Bucknell University, at Sylvania in Emporium, Department of Defense in Philadelphia, Penn State University and Josephthal and Company where she retired then went on to work at the Commonwealth of PA Labor and Industry, serving as secretary in all places. Beulah graduated from Sunbury High School in 1936 and received a Bachelor in Science degree in 1940 from Bucknell University. She was an avid fan of Penn State University football and loved bingo, playing cards, and working with stained glass; in June of 1986 she joined the Red Lion Senior Center where she served as secretary and was very active. She was a member of Great Island Presbyterian Church in Lock Haven. She is survived by one daughter, Helen J. Hughes of Brogue; one son, Ronald C. Bowes of Belfont; one brother, Richard Eyster of Northumberland; and nieces and nephews. Viewings will be held Wednesday from 6 to 8 p.m. and Thursday from 12 noon to 1 p.m. at Burg Funeral Home, Inc., 134 W. Broadway, Red Lion. The service will be 1 p.m. Thursday at the funeral home with the Rev. Dr. Leon C. Via, III, Chaplain of Memorial White Rose Hospice and Home Care, officiating. Burial will be private and at the convenience of the family in Cedar Hill Cemetery in Lock Haven. In lieu of flowers, contributions may be offered to the Red Lion Senior Center, 20 Gotham Place, Red Lion, PA 17356 or to White Rose Hospice, 1412 Sixth Ave., York, PA 17406. Online condolences may be offered at www.BurgFuneralHome.com

The family of Beulah E, (Eyster) Bowes created this Life Tributes page to make it easy to share your memories.