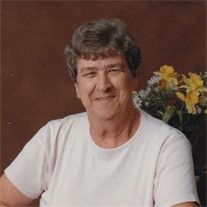 Beverly A. (Searle) Throne, 75, entered into eternal rest after a brief illness on Thursday, April 21, 2016, at Colonial Manor Nursing Home. She was the wife of James R. Throne. She was born in York, on November 14, 1940, and was the daughter of the late Harold and Dorcas V. (Hartman) Searle. Upon graduating from William Penn High School, Beverly worked as an Administrative Secretary at the Court House in the Register of Wills Office and as a secretary at various other places. She was also a homemaker for many years. In addition to her husband, James, she is survived by a daughter, Tamelia L. Langione and her husband, Lonny of Dover; a son, James Bradley Throne and his wife, Renee' of Red Lion; five grandchildren, Anthony James Langione and his wife, Joann of Lancaster, Ashley Langione of Dover, and Timothy, Zachary, and Hunter Throne, all of Red Lion; one great-grandson, Anthony Langione of Lancaster; and numerous nieces and nephews. She was preceded in death by four brothers, Harold, Richard, Gerald, and Robert Searle; and her father-in-law and mother-in-law, James and Thelma Throne. There will be a viewing from 6 to 8 p.m. Monday, April 25, at Burg Funeral Home, Inc., 134 W. Broadway, Red Lion. A Service of Honor and Praise for Beverly will begin on Monday at 8 p.m. at the funeral home. The Rev. Richard B. Starr will officiate. A graveside service of Honor and Praise will be on Tuesday, April 26, at 2 p.m. at Indiantown Gap National Cemetery in Annville. If attending, please meet there at 1:45 p.m. In lieu of flowers, contributions may be offered to Memorial White Rose Hospice, 1412 6th Ave., York, PA 17403. Beverly and James married on December 20, 1958, celebrating 57 years together. Beverly enjoyed volunteering with AARP for 21 years, helping many elders with their taxes. In 2007, she was the recipient of the Jefferson Award for her dedicated volunteer work.The family would like to extend their sincerest appreciation to the Staff at Colonial Manor Nursing Home for all of their wonderful care given to Beverly during her stay there. She will be greatly missed by all who knew and loved her.

Beverly A. (Searle) Throne, 75, entered into eternal rest after a brief illness on Thursday, April 21, 2016, at Colonial Manor Nursing Home. She was the wife of James R. Throne. She was born in York, on November 14, 1940, and was the daughter... View Obituary & Service Information

The family of Beverly A. ( Searle) Throne created this Life Tributes page to make it easy to share your memories.

Beverly A. (Searle) Throne, 75, entered into eternal rest after...