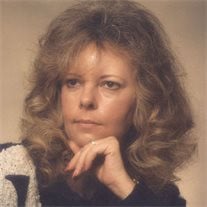 YORK Brenda M. (Miller) Wagner, 57, entered into rest after a courageous battle with breast cancer at 10:40 a.m. Friday, December 3, 2010, at Manor Care South. She was born in York, on February 17, 1953, and was the daughter of Althea (Runkle) Miller of York. Brenda worked at Dentsply for 13 1/2 years as an assembler, and then drove a van for F & S Transportation for nine 1/2 years. She was also a homemaker. She loved going to yard sales but most of all she loved spending as much time as she could with her granddaughter. In addition to her mother, Althea, she is survived by two daughters, Jessica Wagner of Virginia and companion, Michael Freedman, and Amanda M. Boettcher of York and husband, Chad; one granddaughter, Madison Boettcher; two brothers, Woody Miller and Scott Miller, both of York; two sisters, Althea Craul and Sharon Sowards, both of York; aunt, Sis of York; uncle, Bob of New York; and several nieces and nephews. She was preceded in death by her grandmother, Mazie Runkle; a son, Richard Henry Wagner; and a brother, Glenn H. Miller. There will be no viewing. Cremation will take place with Burg Funeral Home, Inc., 134 W. Broadway, Red Lion. Family and friends may extend their condolences on Tuesday from 6 to 7 p.m. A memorial service will begin at 7 p.m. at the funeral home. Burial will be at Susquehanna Memorial Gardens at the convenience of the family. In lieu of flowers, contributions may be offered to York Health Foundation, "Cancer Patient Help Fund", 912 S. George St., York, PA 17403. Memorial condolences can be made at www.BurgFuneralHome.com

The family of Brenda M Wagner created this Life Tributes page to make it easy to share your memories.

Send flowers to the Wagner family.