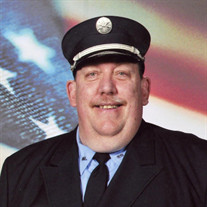 Bryan L. “Bubba”, “Gilby” Gilbert, left this earthly life for life eternal with his Lord and Savior on Saturday, August 28, 2021 at 1:45 pm at his residence at the age of 59. He was the husband of Tabitha M. (Holloway) Gilbert of Red Lion, to whom he married on February 14, 1997, celebrating 24 years together. He was born in Havre de Grace, MD. on January 13, 1962 and was the son of the late Richard E. Gilbert and his late wife Cheryl A.. (Mundis) Gilbert and the late Linda J. (Roseberry) Fake and her husband Harold J. Fake, Sr. of Thomasville. Bryan graduated from Red Lion Area High School, Class of 1980. He worked at various jobs throughout the years. He was a very active member of Winterstown United Methodist Church, a 32-year member of the former Leo Fire Company #34, now known as Alliance #77 of Red Lion, where he was presented with the Chief’s Award in 2009. Bubba was an avid Pittsburgh Steelers Fan, he enjoyed Drag Racing and met John Force, an American NHRA Drag Racer, and was a Rusty Wallace Nascar Fan. Bryan and Tabby have two sons, Dawson L. Gilbert and Hunter J. Gilbert, both of Red Lion. He was the brother to: Harold J. Fake, Jr., Lorine Fake Cummins, Lori A. Heckman, Lana A. Endres, Julie L. Gilbert, and Cheri M. Fulcher. Bryan leaves his five aunts, Ethel Meek, Daisy Schnurr, Carol Bradford Roseberry, Donna Mayes (Barry) and Betty Gagnong, along with numerous cousins. He also leaves his mother and father-in-law, Floyd and Marie (Huson) Holloway of Felton, his stepfather, Harold J. Fake, Sr. of Thomasville, and his two brother-in-law, Jeremy Holloway of Felton and Eric Holloway (Michele) of Dover. He was preceded in death by a sister, Lisa A. Smith, and his uncles, Milton Meek, Lawrence Roseberry, Lorne Schnurr, Howard Roseberry and Raymond Gagnon. Cremation will take place with Burg Funeral Home, Inc., 134 W. Broadway, Red Lion. A Memorial Service to Honor and Praise Gilby’s life will begin at 11 am on Saturday, September 4th at Winterstown United Methodist Church 12184 Winterstown Road, Felton, PA 17322. Family and friends may extend their condolences from 9 to 11 am on Saturday at the church. His pastor, Rev. David K. Shultz, assisted by Chaplain Michael A. Ohliger, will officiate. Burial will follow the service at Lebanon Lutheran Cemetery in Felton. In lieu of flowers, contributions may be offered to: Burg Funeral Home, Inc., 134 W. Broadway, Red Lion, PA 17356 to assist the family with funeral expenses or to Alliance Fire and Rescue Services #77, 201 W. Broadway, Red Lion or to Winterstown United Methodist Church, 12184 Winterstown Road, Felton, PA 17322. Bryan was a very happy, outgoing guy, with a heart of gold. He would help anyone who asked and even when He was not asked, he was always there for you if he knew you needed something. He was a family man to Tabby and his sons, Dawson and Hunter whom he loved with all his heart, but this also included all his family at the firehouse, at church and basically anyone he met. He may not have known you at first, but before he parted ways he was saying “see you later” to another friend. No one was a stranger to Bryan. I just wanted to let you know that I made it home. The journey wasn’t an easy one, but it didn’t take too long. Everything is so pretty here, so white, so fresh, so new. I wish that you could close your eyes so you could see it too. Please try not to be sad for me. Try to understand. God is taking care of me…. I’m in the shelter of His hands. Here there is no sadness, and no sorrow, and no pain. Here there is no crying, and I’ll never hurt again. Here it is so peaceful, when all the angels sing. I really have to go for now…. I’ve just got to try my wings. IN YOUR HEARTS FOREVER.

The family of Bryan L. "Bubba" "Gilby" Gilbert created this Life Tributes page to make it easy to share your memories.

Send flowers to the Gilbert family.