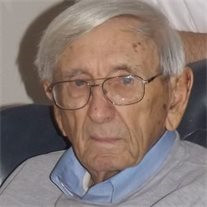 Gene Burnell "Smitty" Haines, formerly of East Prospect, went home to be with his Lord and Savior on Friday, April 20, 2018 at the age of 96. He was the husband of the late June V. (Fillmore) Haines who entered into rest on February 13, 2006. He was born on December 10, 1921 and was the son of the late Nelson E. and Velma N. (Kline) Haines. Smitty was a United States Army Veteran serving in WWII during the Asiatic-Pacific Theater of Operations with the Anti-tank Company, 34th Infantry Regiment, 24th Division. He was employed as a heavy equipment operator for the the former Klines Quarry now known as County Line Quarry from where he retired after more than fifty years of employment. He was an avid trap shooter with the Izaak Walton League and a life member of the East Prospect Fish & Game. Previously he played baseball for the Twilight League, now known as the Susquehanna League and played in the East Prospect Community Band. Smitty is survived by a daughter in law , Sarah Jane Haines of York a granddaughter, Sherri Haines Massa and her husband Ernest of Wrightsville, a grandson, David W. Haines and his wife Brenda of Lock Haven a great granddaughter, Lydia E. Massa of Wrightsville and numerous nieces and nephews. He was preceded in death by a son, Lance (Lanny) W. Haines on October 23, 1991 and a brother, Ray "Scottie" Haines. Viewing will be on Tuesday, April 24th from 9:30 to 10:30 am at Zion United Methodist Church, 1 N. Main St., East Prospect. A Service of Honor and Praise for Smitty will begin at 10:30 am at the church with his pastor, Rev. Albert R. Horst officiating. Burial will be at East Prospect Riverview Cemetery with a flag folding ceremony presented by the York County Veterans Honor Guard. Burg Funeral Home, Inc., 134 W. Broadway, Red Lion is assisting the family with the arrangements. In lieu of flowers, memorial contributions may be offered to Riverview Cemetery Association, PO Box 345, East Prospect, PA 17317 or to Pappus House, 253 Cherry St., York, PA 17402. Smitty enjoyed spending time with his family. The family would like to express their gratitude to the Community Hospice Care Team and the Pappus House Team for the exceptional care he received during his journey.

Gene Burnell "Smitty" Haines, formerly of East Prospect, went home to be with his Lord and Savior on Friday, April 20, 2018 at the age of 96. He was the husband of the late June V. (Fillmore) Haines who entered into rest on February 13, 2006. He... View Obituary & Service Information

The family of Gene Burnell Haines created this Life Tributes page to make it easy to share your memories.

Send flowers to the Haines family.