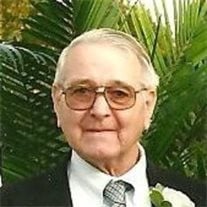 McWilliams RED LION Burnell L. McWilliams entered peacefully into eternal life surrounded by his loving family on Sunday, February 5, 2012, after a brief illness at 8:21 p.m. at Manor Care-South at the age of 87. He was the husband of Pauline M. (Spangler) McWilliams, of Red Lion, whom he married on Nov. 14, 1942, celebrating 69 wonderful years together. He was born in Seven Valleys on February 29, 1924 and was the son of the late Palmer D. H. and Mildred (Lentz) McWilliams. Burnell was a bricklayer and then worked at Harley Davidson of York, retiring in 1998 at the age of 74 after many years of service. He was a longtime and faithful member of Arlington EC Church in Red Lion. He traveled to Israel, Aruba, Australia, Alaska, New Zealand and Hawaii to name a few and he loved baseball, playing for the Twilight League then became the manager and then an umpire. The Baltimore Orioles were his favorite team and gardening kept him busy, he was especially fond of his raspberries. He also raised Beagels, Dalmatians and German Shephards. Burnell was a hard worker. He began at the age of 8 working on the family farm. He was thrilled to have met the love of his life and to marry Pauline. For her, he singlehandedly built the family home and was very proud of that. Besides his wife, Pauline, he is survived by four sons, Barry L. McWilliams of Manakin-Sabot, Va. and his wife Denise Carter, Stephen K. McWilliams of Red Lion, Jon P. McWilliams of Lancaster and his wife Caroline, and Daniel R. McWilliams of York; one daughter, Judith A. McWilliams of Shelburne Falls, Mass. and her companion John MacDougal; 13 grandchildren; 17 great-grandchildren; two brothers, Dennis McWilliams of Seven Valleys and Ronald McWilliams of Jacobus; three sisters, Arlene Roser of York, Grace Howard of Glen Rock and Charmaine Barrick of Spring Grove; numerous nieces and nephews. He was preceded in death by two sons, David B. McWilliams on April 28, 1995, and Thomas L. McWilliams in 1943; and three daughters, Cynthia J. Noonan on Feb. 14, 2009, Sandra L. McWilliams in 1944 and Beverly S. McWilliams in 1953; and three brothers and one sister. There will be no viewing. Visitation will be from 9 to 10 a.m. Saturday at Arlington E.C. Church, 585 Lombard St., Red Lion. The service will be 10 a.m. Saturday at the church with his paster, Rev. Sterling I. Trimmer, officiating. Burial will be in Salem Union Cemetery in Jacobus. Burg Funeral Home, Inc., 134 W. Broadway, Red Lion, is handling the arrangements. In lieu of flowers, contributions may be offered to Arlington E.C. Church Memorial Fund, 585 Lombard St., Red Lion, PA 17356. Burnell was a wonderful husband, father and grandfather. He had a good life and gave the same to his family, that he adored. He will be missed by many.

McWilliams RED LION Burnell L. McWilliams entered peacefully into eternal life surrounded by his loving family on Sunday, February 5, 2012, after a brief illness at 8:21 p.m. at Manor Care-South at the age of 87. He was the husband of Pauline... View Obituary & Service Information

The family of Burnell L. McWilliams created this Life Tributes page to make it easy to share your memories.

Send flowers to the McWilliams family.