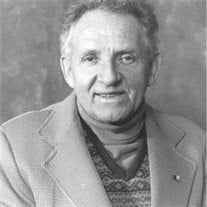 YORK Burnell S. Bankert, 89, entered into rest after a lengthy illness on Saturday, December 4, 2010, at 3:55 p.m. at York Hospital. He was the husband of Ethel L. (Frey) Bankert. Born in Manheim Twp., on March 14, 1921, he was a son of the late Ralph H. and Bertha (Wildasin) Bankert. He worked for PH Gladfelter, retiring on February 1, 1985, after 38 years of service. He loved to work in his garden, draw and paint as well as being outside watching the wildlife. He was a member of Bethlehem UM Church in Dallastown since 1990. In addition to his wife, he is survived by a daughter, Mary Ann Landsberger of Spring Grove and husband, Fred; one son, Jacob W. Bankert of Hanover and wife Wanda; four step-children, Dennis Martin of Hanover, Thomas Witmer of Knoxville, Tenn., and wife Lois, Walter Witmer of Plano, Texas and wife Colleen, and Susan Basile of York and husband Gregg; 12 grandchildren; several great-grandchildren; one brother Earl Bankert of Jefferson; two sisters, Loretta Shaffer of Hanover, and Mary Jane Stangel of McSherrystown; numerous nieces and nephews. He was preceded in death by his step-son, David Witmer who passed away in 2002; and also two brothers and two sisters. Viewing will be Wednesday from 6 to 7 p.m. at Burg Funeral Home, Inc., 134 W. Broadway, Red Lion. The service will begin at 7 p.m. Wednesday at the funeral home with his pastor, the Rev. Roger H. Mentzer, officiating. Burial will be in Dallastown Union Cemetery. In lieu of flowers, contributions may be offered to Bethlehem UM Church, 109 E. Main St., Dallastown, PA 17313

The family of Burnell S. Bankert created this Life Tributes page to make it easy to share your memories.

YORK Burnell S. Bankert, 89, entered into rest after a lengthy...