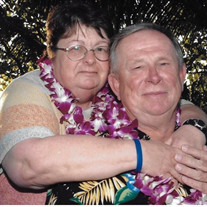 Carolyn Marie Dabrowka Treppe passed away surrounded by her family and listening to Billy Joel on Saturday, May 30, 2020 in York, Pennsylvania. A second-generation American and the granddaughter of Polish immigrants, Carolyn was born and raised in the Eastwood neighborhood of Baltimore City. She grew up a working class city girl, and after losing her father at the age of 12, she and her brother began working part-time jobs to help support her family. That work ethic and humility stayed with her for her entire life and was passed along to her daughters. She did everything she could to ensure they had opportunities that she felt she missed. She attended Our Lady of Fatima grade school and graduated with the inaugural class of Our Lady of Pompeii High School in in Highlandtown in 1964. After high school, she left city life behind, married John Vincent Treppe on August 5, 1967, and started life as an Air Force wife living in Biloxi, Mississippi and Lewiston, Montana where she learned to drive in some seriously major snow. Carol and John settled in the country in Millers, Maryland where they raised their two daughters before moving to Amish country in Brogue, PA in her retirement years. The working class Baltimore Catholic school girl eventually traveled the country and the world to visit one daughter in London, Oxford, and Stratford-Upon-Avon and the other daughter in Newquay, on the Cornish coast of England. She visited the beaches of Normandy, Monet's gardens at Giverny, and the Eifel Tower in Paris. She celebrated her 40th wedding anniversary in Hawaii. Her last international flight was a visit to the homes of her ancestors in Krakow and Warsaw, Poland and the Treppe family birthplaces in Vilnius, Lithuania. She regularly visited her oldest daughter's family outside of Madison, WI where she became an aficionado of cheese and spoiled her grandchildren rotten. She celebrated her 50th wedding anniversary in Gettysburg, PA in August of 2017. She was a devoted mother, the kind who sewed her daughter's Easter dresses and Halloween costumes herself, who drove them to every single play practice and sat through every awkward performance. She was the kind of cook who collected and read cookbooks, but rarely used one to cook. She hardly referenced recipes and her measuring spoons collected dust through lack of use. She eyeballed everything to perfection. She had a wicked sense of humor, a loud infectious laugh, and absolutely no indoor voice. She was always younger than her years, wore Doc Martens well into her 50s and had head full of dark black hair to her last day. She loved dancing and music. She was an avid car-singer, passing that hobby along to both of her daughters who will still belt out a good Elton John song on a trip to the grocery store. Carol was welcomed into the next world by her father, Stanley Thomas Dabrowka (d. 1958); her daughter Cassandra Treppe (d. 1969); her mother, Amelia Markiewicz Dabrowka (d. 1983); and her brother Richard Joseph Dabrowka (d. 2011). She leaves behind a substantial Polish pottery collection along with the broken hearts of her husband of 53 years, John Vincent Treppe of Brogue, PA; her daughters Christina Treppe of Baltimore, MD and Carleen Treppe Fisher of Madison, WI; her son-in-law Douglas James Fisher; and her two grandchildren Helen Day Fisher (14) and Thomas Charles Fisher (11). Burg Funeral Home, Inc., 134 W. Broadway, Red Lion is assisting the family with the arrangements. A Service to celebrate Carolyn’s life with all of her favorites, pierogis, golabki, Polish vodka, and Billy Joel and Elton John music - will be announced at a future date. In lieu of flowers, please consider a donation to the American Lung Association (lung.org) in Carol's memory. We Remember Her: At the rising of the sun and at its going down, we remember her. At the blowing of the wind and the chill of winter, we remember her. At the opening of the buds and in the rebirth of spring, we remember her. At the blueness of the skies and in the warmth of summer, we remember her. At the rustling of the leaves and in the beauty of autumn, we remember her. At the beginning of the year and when it ends, we remember her. When we are weary and in need of strength, we remember her. When we are lost and sick in heart, we remember her. When we have joy we crave to share, we remember her. When we have decisions that are difficult to make, we remember her. When we have achievements that are based on theirs, we remember her. As long as we live, they too will live; for they are now a part of us, as we remember her. REMEMBERING ALWAYS A BEAUTIFUL LIFE- JOHN, CHRISTINA, CARLEEN, DOUGLAS, HELEN AND THOMAS. www.BurgFuneralHome.com

Carolyn Marie Dabrowka Treppe passed away surrounded by her family and listening to Billy Joel on Saturday, May 30, 2020 in York, Pennsylvania. A second-generation American and the granddaughter of Polish immigrants, Carolyn was born and... View Obituary & Service Information

The family of Carolyn Marie (Dabrowka) Treppe created this Life Tributes page to make it easy to share your memories.

Carolyn Marie Dabrowka Treppe passed away surrounded by her family...

Send flowers to the Treppe family.