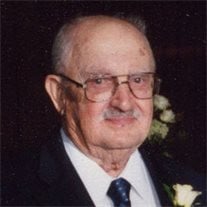 Carroll "Buck" E. Anderson, 94, died on Friday, March 7, 2014, at his home. He was the husband of the late Mildred L. (Snyder) Anderson, to whom he was married for 67 years. He was born in Winterstown Borough on May 3, 1919, and was the son of the late J. William and Irene (Herbst) Anderson. Carroll was an entrepreneur. His life endeavors included operating a dairy, raising cattle, farming, lumber mill and hardware store owner, home building, and land development. He was an avid hunter and fisherman who traveled to Wyoming, Colorado, Florida, Tennessee, Anticosti Island in Quebec, Potter and Elk Counties and many other places to pursue his sports. He raised deer, buffalo, bear, red stag, elk, turkeys, and pheasants. He was a pilot and had an airstrip on his farm for many years. He was one of the charter members of the Winterstown Volunteer Fire Company and served on Winterstown Borough Council. He is survived by four sons of Red Lion, Stephen E. Anderson (his wife Brenda), Larry K. Anderson (his wife Linda), Carroll I. Anderson (his wife Brenda), and Lowell K. Anderson (his wife Michele); and one daughter, Andrea S. Anderson of Lower Chanceford Township; 18 grandchildren; 25 great-grandchildren; and two sisters, Mary Reachard of York and Helen Toft of Port St. Lucie, Fla.; and numerous nieces and nephews. He was preceded in death by two brothers, Lloyd and Slade Anderson and a sister, Charlotte Trout. There will be no viewing. Cremation will take place with Burg Funeral Home, Inc., 134 W. Broadway, Red Lion. Family and friends are invited to share remembrances and extend condolences on Saturday, March 15, from 10:30 to 11:30 a.m., immediately followed by a Celebration of Life service and luncheon, all to be held at Heritage Hills Golf Resort, 2700 Mount Rose Avenue, York, PA 17402. Burial will be private and at the convenience of the family. The family would like to thank Deanie Taylor King, Dory Tyson, Wendy Lunsford, Jeannette Voucht, Erik Scallorn, the late Ruth Durand and all other caregivers for the love and special care provided to their father to fulfill his wish to remain in his home. Online condolences may be offered at www.BurgFuneralHome.com

The family of Carroll E. Anderson created this Life Tributes page to make it easy to share your memories.

Send flowers to the Anderson family.