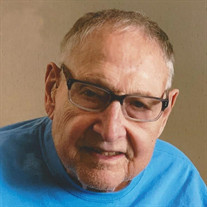 Charles “Charlie” Edward Waltemyer, of York, went home to be with his Lord and Savior on Thursday, July 2, 2020 at 8:10 pm at Manor Care -South, at the age of 90. He was the loving husband of Charmaine E. (Snyder) Waltemyer, of York, to whom he married on June 30, 1951, celebrating 69 wonderful years together. He was born in Yoe, on December 10, 1929 and was the son of the late Millard L. and Mary (Leiby) Waltemyer. Charlie graduated from Red Lion High School Class of 1945. He was a lineman with the former GTE, aka, Verizon, retiring after 29 years of service. Charlie received the Morris Felton Award for saving the life of a man from being electrocuted while on the job. He was an avid fan of the Red Lion Lady Lion’s basketball. Charlie liked fast cars and driving fast. His family was his top priority and spending quality time with all of them was meaningful to him. He was a longtime and active member of St. Paul’s United Methodist Church in Red Lion, where he served as a former trustee and usher. Besides his wife, he leaves his son, Michael C. Waltemyer and his wife Irene of York, and a daughter, Michelle C. Snyder and her husband James D. of Lake Havasu City, AZ. Charlie was the grandfather to Justin Snyder and his wife Jennifer of Lake Havasu City, AZ, Lauren Welker and her husband Travis of Hanover, and Corey Waltemyer and his wife Christine of York. He was a great grandfather to Deagan Snyder, Charlee and Brody Waltemyer, Luke, Lincoln and London Welker, and he also leaves numerous nieces and nephews. Charlie was preceded in death by his siblings, James Waltemyer, Mildred Grandy, Katherine Williamson, George Waltemyer and Ernest Waltemyer. The services for Charlie will be private, with Rev. Mitchell M. Galloway, retired United Methodist pastor, officiating. Burial will be at Susquehanna Memorial Gardens at the convenience of the family. Burg Funeral Home, Inc., 134 W. Broadway, Red Lion will be assisting the family with the arrangements. In lieu of flowers, contributions may be offered to: St. Paul’s United Methodist Church, 45 First Ave., Red Lion, PA 17356, or to the Alzheimer’s Association GPA, 2595 Interstaate Drive, Ste. 100, Harrisburg, PA 17110.

The family of Charles "Charlie" Edward Waltemyer created this Life Tributes page to make it easy to share your memories.

Charles “Charlie” Edward Waltemyer, of York, went home to be...

Send flowers to the Waltemyer family.