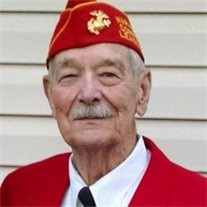 Charles "Charlie" F. Overmiller, 83, of Windsor, passed away at York Hospital , at 8:33 pm on Friday, December 16, 2016 and is now in the presence of his Lord. He was the beloved husband of Dawn E. (Grove) Overmiller to whom he married on June 9, 1957, celebrating 59 years together. Charlie was born in Shrewsbury Township on May 14, 1933 and was the son of the late Morgan H. and M. Marguerite (Reimold) Overmiller. He worked at the former Warner's Dairy and then was a Route Supervisor with Rutter's Dairy, retiring in 1998 after 40 years of service. After retirement Charlie drove bus for the RLSD and Lion Bowl. He was a lifelong member of the Winterstown United Methodist Church where he was actively involved. A member and past president of The York Southeast Gideons for 27 years, a United States Marine Corps Veteran serving during the Korean War and a member of the 1st Capital Detachment 521, York County, PA Marine Corps League. He served as the former Chaplain of the Marine Corps. Charlie also played the trumpet for the Marine Corps Band, the Southern York County Band and the Red Lion Concert Band. Besides his wife, Dawn, he is survived by a daughter, Lisa L. (Overmiller) Koons and her husband Daniel of York. Two sons, Brian L. Overmiller and his wife Lori of Red Lion and Wade A. Overmiller and his wife Angela of Felton. Eight grandchildren, Dustin (Lauren), Brock, Dena, Reese, Ciera, Chase, Carissa (Stephen) and Shawnee. Two brothers, Donald Overmiller (Janet) of Red Lion and James Overmiller (Pastor Ann) of Ralston, PA. Step Sister, Sandy Wagner (Dennis) of Spring Grove and a Sister in law, Donna Overmiller of Felton. Numerous nieces and nephews. He was preceded in death by his two step mothers, Romaine (Duke) Overmiller and Dorothy (Lutz) Overmiller, a sister, Jacqueline, two brothers, Emerson and Richard, a step sister, Eleanor and a step brother, Jack. Viewing will be on Tuesday, December 20th from 6-8 pm at Burg Funeral Home, Inc., 134 W. Broadway, Red Lion, and on Wednesday December 21st from 9-10 am at Winterstown United Methodist Church, 12184 Winterstown Road, Felton, PA. The Marine Corps League service will begin on Wednesday at 10 am followed by a service of Honor and Praise for Charlie at the church with his pastor, Rev. Mitch M. Galloway officiating with his sister in law, Pastor Ann Overmiller. Burial will follow at Winterstown UB Cemetery with full military rites offered by the York County Veterans Honor Guard. Contributions in Memory of Charlie may be offered to the Winterstown UM Church, 12184 Winterstown Road, Felton, PA 17322 or to The Gideons International, PO Box 501, Red Lion, PA 17356-0501. Charlie was a God Loving and very faithful family man. He adored his wife, Dawn and his children and grandchildren. He was a very caring man to everyone he met. An avid bowler and hunter and enjoyed watching the Ravens and the Orioles play.

Charles "Charlie" F. Overmiller, 83, of Windsor, passed away at York Hospital , at 8:33 pm on Friday, December 16, 2016 and is now in the presence of his Lord. He was the beloved husband of Dawn E. (Grove) Overmiller to whom he married on June... View Obituary & Service Information

The family of Charles F. "Charlie" Overmiller created this Life Tributes page to make it easy to share your memories.