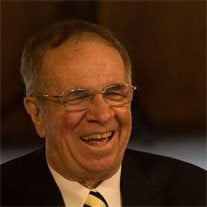 Charles "Charley" H. Hartman, Ed.D., 80, died on Tuesday, March 5. He was an accomplished public servant and businessman, a beloved father, grandfather, and friend, and a devoted spouse to Andrea S. Anderson, with whom he shared a home, life, and enduring love. In addition to his wife, Andrea, he is survived by three daughters, three sons, and eight grandchildren: Elizabeth Hartman Van Scoyoc of Virginia Beach, VA (her husband Jim, and their children; Kent, Kara and Cooper); Amy Hartman Cover of Gaithersburg, MD (her husband Rick and their children Steven (his wife Nicole) and Michael; Jennifer Hartman, of Stewartstown, PA; Dr. Eric Hartman of Providence, RI (and his wife Dr. Shannon Wheatley Hartman and their daughter Annabelle); David Hartman of Sewickley, PA (and his wife Lisa Dippold Hartman and their son Evan) and Scott Hartman of Baltimore, MD (and his wife Laura Piper Hartman and their daughter Piper). Charley was preceded in death by a brother, Earl E. Hartman, Jr., of York in 1990. Born February 1, 1933 in Red Lion, he was the son of the late Earl E. and Jeannette (Kline) Hartman. Charley graduated from Red Lion High School in 1950 where he lettered in basketball and served as class president for four years, and from Millersville State Teachers College in 1954, where he was student council president. He earned two graduate degrees from Michigan State University - a Master's of Arts degree in 1958 and a Doctorate in Education in 1962. Following service in the U.S. Army (Europe), Charley began a career in highway safety and transportation that spanned more than a quarter of a century. Additionally, he served in executive and consulting capacities for nonprofit organizations and national health associations, as a school district's director of support services and transportation, and as an office manager at a local law firm. Charley was a secondary school teacher in Hollidaysburg, PA before accepting a position as a full-time education faculty member at the University of Wisconsin (Madison) and the University of Wisconsin-Milwaukee. As an associate professor of safety education at Illinois State University, he developed and implemented ISU's teaching minor in safety and driver education. He later served as an adjunct faculty member in management at Penn State University (Capital Campus). In Washington, D.C., Dr. Hartman was the Director of Highway Safety for the Automotive Safety Foundation/Highway Users Federation (1965-1970), the first Deputy Administrator for the newly created National Highway Traffic Safety Administration (1970-1973), and the founding President of the Motorcycle Safety Foundation, where he served from 1973 to 1984. At the U.S. Department of Transportation, he focused early attention and resources on the drinking driver problem, and assisted with the initial rule making that resulted in the mandatory installation of airbags in cars. At the Motorcycle Safety Foundation, he and his staff: developed the Motorcycle Rider Course, still used nationwide to train beginning motorcyclists; spurred improvements in motorcycle licensing; initiated public information and research programs, and built the Foundation into a nationally known and respected traffic safety organization. At the national level, Charley also served as: Executive Vice President of the American Alliance for Health, Physical Education, Recreation and Dance in Reston, VA (1988-1990); and Executive Director of the American College Health Association in Linthicum, MD (1990-1998). Following his retirement and return to York County, he served as a Senior Consultant to the York Nonprofit Management Development Center (1998-2002); Director of Transportation and Support Services for the Red Lion Area School District (2003-2004); and Office Manager for the Andreas S. Anderson Law Offices (2004-2012). In 1993 Dr. Hartman was elected to The Hall of Fame, Red Lion Area Schools, where he also served on the Board of School Directors for 17 years (1987-2003) and as president of the Board for nine years. He was appointed by President Jimmy Carter to the National Highway Safety Advisory Committee (1977-1981). In the field of highway safety and transportation, Dr. Hartman published writings numbered more than one hundred. During his highway safety career he traveled to and spoke publicly in each of the fifty states and six foreign counties. In 1972 he was named Wisconsin Traffic Safety Educator of the Year, and in 1973 he received the U.S. Department of Transportation Secretary's Award. Dr. Hartman, in 1977, earned the American Society of Association Executives Certified Association Executive (CAE) designation, a distinction he maintained throughout the remainder of his career. He held membership and served in various elected and appointed offices in several national organizations, including the American Association for Automotive Medicine, the American Driver and Traffic Safety Education Association, the American Motorcyclist Association, the American Society of Association Executives, Phi Delta Kappa and SAE International. Family and friends are invited to share remembrances and extend condolences on Saturday, March 9th, from 11:00 a.m. to 12:30 p.m., immediately followed by a Celebration of Life service and luncheon, all to be held at Great American Saloon, 20 Dairyland Square, Red Lion, PA 17356. Burg Funeral Home, Inc., 134 W. Broadway, Red Lion will be handling the arrangements. In lieu of flowers, contributions may be offered to: Red Lion Area Educational Foundation, c/o Red Lion Area School District, 696 Delta Road, Red Lion, PA 17356. On line condolences may be offered at: www.BurgFuneralHome.com

Charles "Charley" H. Hartman, Ed.D., 80, died on Tuesday, March 5. He was an accomplished public servant and businessman, a beloved father, grandfather, and friend, and a devoted spouse to Andrea S. Anderson, with whom he shared a home, life,... View Obituary & Service Information

The family of Charles "Charley" H. Hartman created this Life Tributes page to make it easy to share your memories.