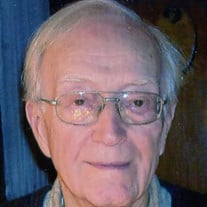 Charles E. Leiphart, of Windsor, joined his Lord and Savior Jesus Christ on Thursday, December 2, 2021 at 11:58 am after a short stay with Hospice and Community Care in Mount Joy. He is the husband of Doris D. (Tomlinson) Leiphart of Windsor. Born in Brogueville on December 11, 1930 to the late Earl and Rachel I. (Altland) Leiphart, Charles graduated from Red Lion and went on to serve in the United States Marines. He transferred to the Navy to become a pilot, and developed a love for flying that followed him all of his life. When his service ended he answered the call of God to preaching and evangelism, earning a Bachelor’s Degree from Toccoa Falls College in Georgia and becoming a pioneer pastor. Charles started three churches and preached and served in many others. After retiring at the age of 65, he started a door-to-door tract evangelism ministry in which he personally delivered the Gospel to over half a million homes in the region. Charles and Doris have seven children, Virginia L. Bender and John, of Monkton, MD, Randall D. Leipart of Drumore, PA, Steven W. Leiphart and Cheryl, of Pickens SC, Timothy C. Leiphart and Jana, of Red Lion, Alison D. Feder, and Marty of Dover, Deanna M. Lamour of Red Lion, and Francine S. Leiphart of Forestville, CA. He also leaves behind nine grandchildren and four great-grandchildren as well as numerous other relations, along with brothers Samuel Leiphart of York and Donald Leiphart of Red Lion, and a sister Geri Snyder of Red Lion. Charles was preceded in death by two siblings, Marlin Leiphart and Janet Heist. The services and burial for Charles will be private and at the convenience of the family, Pastor John D. Waltermyer officiating. Interment will take place at McKendree United Methodist Church Cemetery. Burg Funeral Home, Inc., is assisting the family with the arrangements. Contributions in memory of Charles may be offered to: Lifepath Christian Ministries, 367 W. Market Street, York, PA 17401.

Charles E. Leiphart, of Windsor, joined his Lord and Savior Jesus Christ on Thursday, December 2, 2021 at 11:58 am after a short stay with Hospice and Community Care in Mount Joy. He is the husband of Doris D. (Tomlinson) Leiphart of Windsor. Born... View Obituary & Service Information

The family of Charles E. Leiphart created this Life Tributes page to make it easy to share your memories.

Send flowers to the Leiphart family.