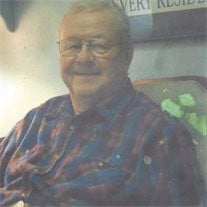 Charlie W. Burns, 86, formerly of Windsor entered into eternal rest on Fri., October 21, 2016 at Susquehanna Valley Nursing and Rehab Center in Columbia. He was the husband of the late Ellen R. (Tome) Burns whom entered into eternal rest on Dec. 22, 1981, and is the companion of Suellen M. Williams of Dallastown for 27 years. Charlie was born in Lower Chanceford Twp., on August 16, 1930 and was the son of the late H. Wilson and Nora E. (Kilgore) Burns. He worked for Warner's Dairy, Allis Chalmers and then at Precision Components in York, retiring in 1992 after 26 years of service. Charlie was an United States Army Veteran. He was a faithful member of Mt. Zion Baptist Church since 1959. In addition to his companion, Suellen, he is survived by a son, Paul E. Burns of York; 2 brothers, Clyde A. Burns of Brogue, J. Harold Burns of Felton; a sister, A. Darlene Burns of Brogue, and several nieces and nephews. Charlie was preceded in death by a sister, Ruth Uffelman in 2006 and a brother J. Milton Burns in 2016. Viewing will be on Wednesday, October 26, 2016 from 10 to 11 AM at Mt. Zion Baptist Church; 48 Muddy Creek Forks Rd., Brogue. A Service of Honor and Praise for Charlie will begin at 11 AM at the church with his pastor, Rev. Chris P. Starr officiating. Burial will follow at Mt. Zion Baptist Church Cemetery. Burg Funeral Home, Inc., 134 West Broadway, Red Lion assisting the family. In lieu of flowers contribution may be offered to: Alzheimer's Association GPA, 3544 N. Progress Ave., Suite 205, Harrisburg, PA 17110.

The family of Charlie W. Burns created this Life Tributes page to make it easy to share your memories.

Send flowers to the Burns family.