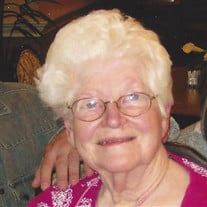 Charlotte C. (Gipe) Haugh, of York, went from life to Life Eternal, after a brief illness on Thursday, November 29, 2018, at 10:35 pm at the age of 95, at Country Meadows where she resided. She was the wife of the late Ray E. Haugh who entered into rest on February 11, 2012. She was born in Chanceford Township on December 5, 1922 and was the daughter of the late Chester L. and Nannie M. (Taylor) Gipe. She went to Red Lion High School and then to the Thompson Business School. Charlotte was a homemaker and was also a longtime volunteer with the York Hospital Auxiliary and the Salvation Army Auxiliary. She was a former Den mother for the cub scouts. She is remembered as being a very kind, loving and sweet person. She loved spending time with her family, but when her grandchildren arrived, they took center stage and nothing else mattered. She absolutely adored each of them. She was a longtime member of St. Paul’s United Methodist Church in Red Lion. She leaves a son, David R. Haugh and wife Melanie of York and a daughter, Linda S. Conaway and husband Timothy of York. Charlotte has four grandchildren, Chad Haugh, Aimee Dietz (Brandon), Brittany Plank (Eric) and Griffin Conaway, along with four great grandchildren, Morghan Lehr, Broghan Dietz, Reaghan Dietz and Emersyn Plank. She was preceded in death by her son, Phil A. Haugh in 1952, her brother, Palmer Gipe and triplet great grandchildren, Cayleigh, Carter and Chase Plank. A Service of Honor and Praise for Charlotte will be on Wednesday, December 5th at 7 pm at Burg Funeral Home, Inc., 134 W. Broadway, Red Lion. Viewing will begin at 6 pm until 7 pm. Chaplain Michael K. Fischer, of Country Meadows will officiate. Burial will be private at Mt. Rose Cemetery. In lieu of flowers, contributions may be offered to: St. Paul’s UM Church, 45 First Ave., Red Lion, PA. 17356. When we are children, we are happy and gay, and our mother is young and she laughs as we play. As she grows older, we look back with love, knowing that mothers are “Gifts from above”. When she “goes home” to receive her reward, she will dwell in God’s kingdom and keep house with the Lord. So dry tears of sorrow, for mothers don’t die, they just move in with God and keep house in the sky, and there in God’s kingdom, they watch from above, to welcome their children with their undying love. www.BurgFuneralHome.com

Charlotte C. (Gipe) Haugh, of York, went from life to Life Eternal, after a brief illness on Thursday, November 29, 2018, at 10:35 pm at the age of 95, at Country Meadows where she resided. She was the wife of the late Ray E. Haugh who entered... View Obituary & Service Information

The family of Charlotte C. (Gipe) Haugh created this Life Tributes page to make it easy to share your memories.

Send flowers to the Haugh family.