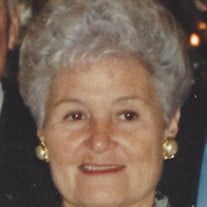 Charlotte M. (Patterson) Wallace, of East Prospect, went home to her Lord and Savior on Tuesday, September 15, 2020, at 9:45 am at Misericordia Nursing Home, at the age of 88. She was the wife of the late James G. Wallace who entered into rest on March 27, 1995. She was born in York County on October 4, 1931 and was the daughter of the late Parker and Hilda (Waltemyer) Patterson. Charlotte graduated from the Red Lion High School, Class of 1949. She began her working career in a cigar factory and later worked at Bendix and ITT Grinnell as a parts distributor. She was a longtime member of the Water’s Edge United Methodist Church in Craley. Charlotte enjoyed volunteering her time and helping with different events when asked, but most of all, she cherished the time she could be with her family. Charlotte leaves her two loving daughters, Suzanne M. Worthing and her husband Jim of Wharton, TX and Cindy L. Armold and her husband Jon of Ormond Beach, FL, and a stepson, Thomas E. Dull of Gettysburg. She was the grandmother of Ashley Alexander (Michael) and Blair Fink, all of Texas, and Elijah Armold of FL and Ellary Gabriel of Wrightsville, along with six great grandchildren, Noah Smith, Reese Foxhoven, Laney Fink, Ethan Fink, Ava and Luke Alexander. Charlotte has two siblings, Parker Patterson and his wife Joy of Red Lion and Karl Patterson and his wife Shirley of Windsor, along with numerous nieces and nephews. She was preceded in death by her son, Keith A. Wallace on April 16, 2020, and her siblings, Marion Tyson, Ken Patterson, Burnell Patterson and Phyllis Tyson. Family and friends are invited to extend their condolences on Saturday, September 19th from 10-11 am, during the time of viewing, at Burg Funeral Home, Inc., 134 W. Broadway, Red Lion. A private burial will take place at Craley St. Paul’s UM Cemetery. Her pastor, Terry L. Robinson, will officiate. A mask is recommended, and social distancing will be observed as much as possible.

Charlotte M. (Patterson) Wallace, of East Prospect, went home to her Lord and Savior on Tuesday, September 15, 2020, at 9:45 am at Misericordia Nursing Home, at the age of 88. She was the wife of the late James G. Wallace who entered into rest... View Obituary & Service Information

The family of Charlotte M. (Patterson) Wallace created this Life Tributes page to make it easy to share your memories.

Send flowers to the Wallace family.