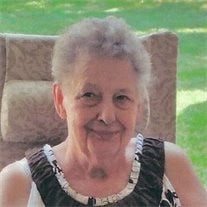 RED LION Clara L. "Lou" (Lindenmuth) Gray, 80 years young, entered into rest on Saturday December 3, 2011, at 1:30 a.m. at her daughter's residence. She was the wife of Thomas E. Gray, who entered into rest on August 8, 1986. Born in Knapps Creek, N.Y., on July 25, 1931, she was the daughter of the late Earl I. and Clara G. ( Perrin) Lindenmuth. She worked in the Pennsylvania State Department of Revenue retiring on September 27, 1991 after 38 years of service. She was raised in upper Pa., and graduated from Mechanicsburg High School. Clara traveled around the world after graduation with her first husband, William Grogan, through the military before settling in Lower Paxton Twp with her second husband, Thomas Gray. She was very active with the 17th Airborne Division Association. Clara helped in obtaining recognition by our government, and military honors for the men who served in the glider division and lost their lives in the line of duty while serving in England. Clara is survived by three sons, Ron Gray and wife, Tooter of Halifax, Michael Grogan and wife, Sue of Duncannon, and Buddy Grogan of Los Angeles, Calif.; one daughter, Kathy Grogan and husband, Randy Carbaugh of Red Lion; seven grandchildren; seven great-grandchildren; one great-great-grandson; and nieces and nephews. She was preceded in death by a granddaughter, Kyara Grogan Carbaugh, who entered into rest on May 25, 2000; and three brothers, Everette, Perrin and Burton Lindenmuth. There will be a viewing Thursday from 6 to 7 p.m. at Burg Funeral Home, Inc., 134 W. Broadway, Red Lion. The service will follow at 7 p.m. at the funeral home, with the Rev. Chester E. Carbaugh, United Church of Christ pastor, officiating. Burial will be private and at the convenience of the family at Blue Ridge Memorial Gardens in Harrisburg. In lieu of flowers, Clara asks you to remember the veterans who gave us our freedom and offer contributions to York County Veterans Honor Guard - c/o John M. Vecero, Jr., 670 Hammond Road, York, PA 17406. To Clara her family came first. She loved traveling across country with her husband "Tommy", family reunions, grandchildren activities and assisting her niece Susie Condotta in tracing the Lindenmuth Family tree. She will be missed tremendously by all, along with her lengthy conversations and her thirst for travel.

The family of Clara "Lou" (Lindenmuth) Gray created this Life Tributes page to make it easy to share your memories.