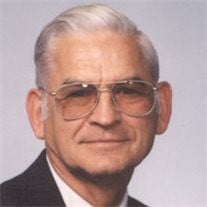 RED LION Clarence L. Yohe, 85, entered into rest after a lengthy illness at 6:58 p.m. on Friday, November 26, 2010, at Pleasant Acres. He was the husband of Pauline V. ( Gladfelter) Yohe, whom he married on December 19, 1944. They celebrated 66 years together. He was born in Rossville, on September 19, 1925, and was the son of the late Luther A. and Bertha M. (Nell) Yohe. Mr. Yohe worked for Terry Strayer Automotive Service, doing body and fender work, retiring in 1991 after many years of service. He was a member of St. John's United Church of Christ in Red Lion. In addition to his wife, Pauline, he is survived by three daughters, Dianne Smith and husband, Will of New Jersey, Linda Hivner and husband, Mick of Red Lion, and Carol Coeyman and husband, Bill of Red Lion; five grandchildren, Shonda VanSyckle and husband, Lew, Shawn Smith and wife, Christy, Chad Coeyman and wife, Amanda, David Hivner and wife, Shelly, and Brian Hivner and wife, Stacy; eight great grandchildren, Aspen and Clay Scaffo, Shawn M. Smith, Schuyler and Shane Coeyman, Christina, Logan and Luke Hivner, and Nicholas Hivner; three sisters, Marie Warner of Red Lion, Anna Mae Leiphart of Brogue, and Betty Yohe of Windsor; and two brothers, Clair Yohe of Red Lion and Russell Yohe of Winterstown. He was preceded in death by a great grandson, Jared Hivner on January 20, 2004; three sisters, Ruth Olphin, Catherine Eckert, and Velma Yohe; and one brother, Charles Yohe. There will be a viewing from 6 to 7:30 p.m. Tuesday at Burg Funeral Home, Inc., 134 W. Broadway, Red Lion. The service will begin at 7:30 p.m. Tuesday at the funeral home with his pastor, the Rev. David D. Tietje, officiating. Burial will be at Susquehanna Memorial Gardens at the convenience of the family. In lieu of flowers, contributions may be offered to St. John's U.C.C. "Memorial Fund",- 161 N. Main St., Red Lion, PA 17356; or to Alzheimer's Association GPA, 3544 N. Progress Ave., Suite 205, Harrisburg, PA 17110-9638; or to York Health Foundation/Parkinson's Disease, 45 Monument Road, Suite 200, York, PA 17403. George enjoyed going hunting. He could always be found working on a car. He liked woodcraft and going to flea markets searching for dolls for his wife's collection. But more importantly, he was a wonderful husband, father, and grandfather who loved nothing more than to spend as much time as he could with his family, especially his many grandchildren

RED LION Clarence L. Yohe, 85, entered into rest after a lengthy illness at 6:58 p.m. on Friday, November 26, 2010, at Pleasant Acres. He was the husband of Pauline V. ( Gladfelter) Yohe, whom he married on December 19, 1944. They celebrated... View Obituary & Service Information

The family of Clarence L. Yohe created this Life Tributes page to make it easy to share your memories.

Send flowers to the Yohe family.