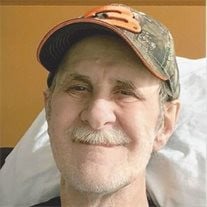 Claudie "Bim" W. Brown, of Wrightsville entered into eternal rest on Saturday, March 25, 2017, at home, surrounded by his loving family at the age of 65. He was the husband of Sharon L. (Heffner) Brown whom entered into eternal rest on August 10, 2015. Born in Chanceford Twp. on May 30, 1951 and he was the son of the late Edward J. and Lucy (Sechrist) Brown. He worked as an inspector at Donsco. Claudie is survived by a daughter –Sherry S. Bailey and her husband Doug Bailey of Wrightsville; two grandchildren – Isaiah Bailey and Isabella Bailey, both of Wrightsville; a sister- Betty Witmer and a brother – Carl Brown, both of East Prospect. He was preceded in death by a grandson, Eric; a sister – Tressa Smith; 9 brothers – Charlie Brown, George Brown, John Brown, Ray Brown, Wayne Warner, Roy Warner, Harry Warner, Joseph Warner, Arthur Warner. Viewings will be on Thursday, March 30th from 6 to 8 pm and Friday, March 31st from 2 to 3 pm at Burg Funeral Home, Inc., 134 W. Broadway, Red Lion. A Service of Honor and Praise for Claudie will begin at 3 pm on Friday, at the funeral home with Rev. James Colpulos of Mt. Calvary UMC and Rev. James Wooster of Wrightsville Hope UMC officiating. Burial will take place at St. James Cemetery. In lieu of flowers, contributions may be offered in Claudie's memory to: Hospice and Community Care ; 224 St. Charles Way, Suite 200 York, PA 17402.

The family of Claudie "Bim" W. Brown created this Life Tributes page to make it easy to share your memories.