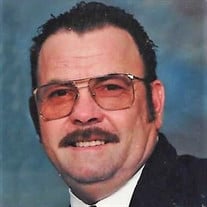 Clifton Ray Hackler, of Red Lion, entered into rest on Wednesday, January 29, 2020, at 2:05 AM, at Manor Care Kingston Court, at the age of 77. He was the husband of Dolly Margaret (Rosh) Hackler, celebrating 55 years of marriage together on June 27, 2019. Ray was born in Sparks, MD. , on April 22, 1942, and was the son of the late Clifton Stewart and Vergie May (Cornett) Hackler. He was a member of the Carpenters Local # 191, and a skilled tradesman constructing many commercial buildings and power plants in the area, including Peach Bottom where he had long term employment, retiring after 40 years in 2004. He attended both the Windsor Assembly of God and Manchester Assembly of God Church. Ray and Dolly met in church, Ray played the guitar and sang with Dolly. Spending time with his family was very important to him. Besides his wife, Dolly, Ray leaves two children; Timothy R. Hackler (Beverly E.) of New Park and Lisa M. Flores ( Jesse) of Aubrey, TX, a grandson, Tyler R. Hackler and girlfriend Jess, three sisters, Betty Bricker of Stewartstown, Nancy Pepple of Ortanna, and Patty Matthews of Hedgesville, WV, along with numerous nieces, nephews and cousins, plus his two loved Yorkies, Cody and Brie, along with beloved grand dog, Lexi. He was preceded by a daughter, Tina Marie Hackler in 1970, a brother, Daniel “Danny” Hackler. Viewing will be on Tuesday, Feb. 4th, from 5-6 pm at Burg Funeral Home, Inc., 134 W. Broadway, Red Lion. Service of Honor and Praise for Ray will begin at 6 pm at the funeral home, with his pastor, Rev. Thomas A. Gilman, officiating. Burial will be private and at the convenience of the family in McKendree UM Cemetery. In lieu of flowers, contributions may be offered to: Alzheimer’s Association GPA, 2595 Interstate Drive, Ste. 100, Harrisburg, PA. 17110.

Clifton Ray Hackler, of Red Lion, entered into rest on Wednesday, January 29, 2020, at 2:05 AM, at Manor Care Kingston Court, at the age of 77. He was the husband of Dolly Margaret (Rosh) Hackler, celebrating 55 years of marriage together on... View Obituary & Service Information

The family of Clifton Ray Hackler created this Life Tributes page to make it easy to share your memories.

Send flowers to the Hackler family.