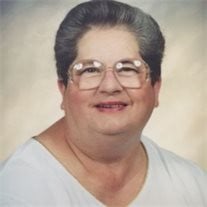 Dalah M. (Bailey) Witmer, of York, formerly of Red Lion, entered into eternal rest unexpectedly on Thursday, September 29, 2016 at her residence at the age of 82. She was the wife of the late Glenn J. Witmer whom entered into rest on October 5, 1986. She was born in York on July 30, 1934 and was the daughter of the late Samuel Bailey and Susan (Warner) Looks. Dalah enjoyed cleaning and assisted others with their housekeeping. She was a longtime member of Messiah United Methodist Church in York where she was a member of the Joy Sunday School Class. Dalah leaves her seven M & M's as they were fondly known, Marie A. Mills and her husband Reuben of Harrisburg, Mary L. Shank and her husband Richard of York, Melody T. Watson and her husband James of Clovis, CA, Michael L. Witmer of Levittown, Mickey G. Witmer and his wife Linda of Railroad, Mark B. Witmer and his wife LouAnn of Havlock, NC and Matthew J. Witmer and his wife Jacey of York. Fifteen grandchildren, 25 great grandchildren, and a great great granddaughter. Four Siblings, Barbara Shenberger of York, Linda Scott of Red Lion and her twin siblings Roberta Benedict of York, and brother, Robert Bailey of York. Aunts, Uncles and numerous nieces and nephews. She was preceded in death by a brother Samuel Bailey. A Service of Honor and Praise for Dalah will be held on Tuesday, October 4, 2016 at 7:00 PM at Burg Funeral Home, Inc., 134 W. Broadway, Red Lion. Viewing will be from 6-7 pm at the funeral home. Her pastor, Rev. Robert A. Vizthum, will officiate. Burial will be at Windsor Cemetery at the convenience of the family. In lieu of flowers, contributions in memory of Dalah may be offered to: Messiah United Methodist Church, 1300 North Beaver Street, York, Pa 17404. Dalah volunteered at Pleasant Acres Nursing Home where she taught a class in Adult Coloring which she loved to do and share with others. Her family was very special to her and she loved spending time with them and especially her grandchildren whom she adored.. On line condolences may be offered at: www.BurgFuneralHome.com

Dalah M. (Bailey) Witmer, of York, formerly of Red Lion, entered into eternal rest unexpectedly on Thursday, September 29, 2016 at her residence at the age of 82. She was the wife of the late Glenn J. Witmer whom entered into rest on October... View Obituary & Service Information

The family of Dalah M. (Bailey) Witmer created this Life Tributes page to make it easy to share your memories.