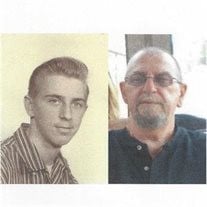 Dale Eugene Smeltzer "Egg", 73, passed away on Tues., Nov. 15, 2016 at his residence with Bailey, his dog by his side. He was the husband of Brenda J. (Miller) Smeltzer; they celebrated 49 years of marriage. Born in Windsor on June 10, 1943, he was the son of the late Mary (Smeltzer) Shaub. Dale was an U.S. Army Veteran and retired from Yellow Freight after many years. He is survived by his wife; a daughter, Michelle M. Dunlap and her husband, Stephen of Windsor; 5 grandchildren, Jala Henise of Harrisburg, Jovi Henise of Windsor, Zachary Dunlap of York, Bree Dunlap of Windsor, and Jesa Miller of York; 4 great-grandchildren, Lillee, Trentyn, Abram, and Charlee; a sister, Marcia Kashner her husband Robert of Windsor; a brother William Shaub and his wife, Susan of Mayland; 2 brother in laws, Tony Miller and his wife, Nita of Red Lion and John Miller of Red Lion. He was preceded in death by a daughter, Kelly Miller and a brother in law, Barry Miller. Burg Funeral Home, Inc., 134 W. Broadway, Red Lion is assisting the family with arrangements. Visitation will be on Sat., Nov. 26th from 2:00-3:00pm at St. Paul's UM Church, 45 First Ave., Red Lion, followed by a Celebration of Life at 3:00pm at the church. Burial will be at the convenience of the family. In lieu of flowers, contributions may be made to Hospice of York; 224 Saint Charles Way, Suite 200, York, PA 17402.

The family of Dale Eugene Smeltzer created this Life Tributes page to make it easy to share your memories.

Send flowers to the Smeltzer family.