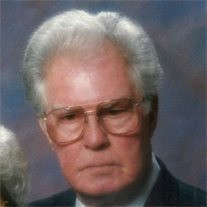 Dale L. Snyder, 94, entered into eternal rest at 11:30 p.m. Wednesday, December 2, 2015, at Autumn House West, where he was a resident since 2008. He was the husband of Anna K. (Ness) Snyder, who entered into rest on March 17, 2001. Dale was born in Brogue (York County), on November 3, 1921, and was the son of the late Sadie (Mitzel) and Samuel Snyder. He began his working career at the Dallastown Cigar and Box Factory and later at York Corporation. He was drafted into the Army in 1941 and served with distinction during WWII , until his honorable discharge in 1945. He spent most of his career in Phoenix, Ariz. He worked at Vernon Tool, but spent the rest of his working career as a mechanical supervisor at Phoenix Union High School and West High School. While in Phoenix, he was a member of Albright United Methodist Church, and in Pennsylvania, he was a member of Chapel Church in Red Lion. He is survived by numerous nieces and nephews. Dale and Anna were preceded in death by an infant daughter, Melanie Lane Snyder. He was also preceded in death by two brothers, Nevin Snyder and Clinton Snyder. There will be no viewing. Family and friends are invited to extend their condolences on Tuesday, December 15, from 10:30 to 11 a.m. at Chapel Church, 3050 Cape Horn Road, Red Lion. Burg Funeral Home, Inc., 134 W. Broadway, Red Lion, will be assisting the family with the arrangements. Service of Honor and Praise for Dale will begin at 11 a.m. on Tuesday at the church with his pastor, the Rev. Brendan L. Hock, officiating. Burial will follow at Heiland View Cemetery with flag folding presentation and taps presented by the York County Veterans Honor Guard. In lieu of flowers, contributions may be offered to Chapel Church, 3050 Cape Horn Road, Red Lion, PA 17356; or to the York County Veterans Honor Guard, c/o John Vecero, 670 Hammond Road, York, PA 17406. Dale enjoyed golfing, fishing, hunting and visits to the casino. The family would like to extend their sincerest appreciation to Ted Thompson and the Staff at Barley Autumn House for all of their wonderful, loving ways and for the care given to Dale during his seven years as a resident. Thanks also to the staff of Grane Hospice, whose compassion, caring, and thoughtfulness to Dale and the family during this difficult time was truly appreciated. Online Condolences may be offered at BurgFuneralHome.com

The family of Dale L. Snyder created this Life Tributes page to make it easy to share your memories.