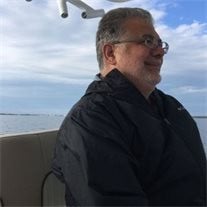 Daniel P. Iula, of Dallastown, entered in rest on Friday, September 15, 2017 at 9:48 am in York at the age of 56. He was the husband of Sarah D. (Davis) Iula to whom he married on October 26,, 1985. Dan was born in Philadelphia on April 10, 1961 and was the son of Catherine E. (DiSepio) Iula of Lansdale, PA and the late Alexander J. Iula. After high school, Dan went to college, earning an Engineering Degree. He worked at Harley Davidson for 18 years and then opened up his own business in York called, Strip – It – Clean. He was a member of St. Joseph's Catholic Church in Dallastown. Besides his wife, Sarah and his mother, Dan leaves to cherish his memory, his five children, Zachary D. Iula and fiancé' Natoshia of Manchester, Jacob M. Iula of Winchester, VA, Elliott J. Iula and wife Angela of York, Alexander J. Iula and Rachel E. Iula both of Dallastown. He has five siblings, Christopher J. Iula of Cleveland, OH, Alexander K. Iula of Blue Bell, PA, Veronica A. Schimpf of Lansdale, PA, Kathleen R. Thorpe of Schwenksville, PA and Carol A. Casatelli of Collegeville, PA along with numerous nieces and nephews. He also leaves his father-in-law, James L. Davis of Lafayette Hill, PA and a brother-in-law, Scott L. Davis and his wife Diane of Horsham, PA. He was preceded in death by his mother-in-law, M. Loretta (Owens) Davis and his brother, Anthony Iula. There will be no viewing. Cremation will take place with Burg Funeral Home, Inc., 134 W. Broadway, Red Lion. Family and friends may extend their condolences on Saturday, September 23rd from 10-11 am at St. Joseph's Catholic Church, 251 E. Main St., Dallastown. A Mass of Christian Burial will begin at 11 am on Saturday at the church with Father John McCloskey, Cap., officiating. Burial will be private and at the convenience of the family. Dan was a great husband and Dad. He loved spending time with his family. He enjoyed boating on the Chesapeake, talking to everyone, whether he knew them or not, walking up behind you and grabbing your ear and a making people laugh with his great sense of humor. He was a very giving man who would go the extra mile to help others and who always gave everyone not just one opportunity but many second chances. "My precious child, I love you and will never leave you. During your times of trial and suffering, when you see only one set of footprints, it was then that I carried you." We love you and miss you Dad, we will meet again someday. In lieu of flowers, contributions may be offered to: St. Jude's Children's Hospital, 262 Danny Thomas Place, Memphis, TN, 38105.

The family of Daniel P. Iula created this Life Tributes page to make it easy to share your memories.

Send flowers to the Iula family.