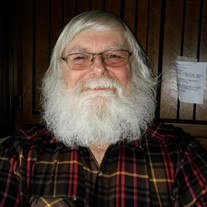 Darryl E. Knisely, of York, took the hand of his Lord and Savior on Thursday, August 12, 2021, after a vehicle accident at 1:56 pm at the age of 75. He was the loving husband of Margaret L. (Busler) Knisely, of York, to whom he married on September 20, 1991, celebrating 29 wonderful years together. He was born in Windsor on February 6, 1946 and was the son of the late Spurgeon E. and Lucille E. (Gentzler) Knisely. After graduation from high school, Darryl had attended Penn State. He worked for the former Catepillar, Inc. in York for 38 years and for the former Anderson Metal in Hellam. He was currently working a job that he loved with Apple Chevrolet in Red Lion, where he was a DX Driver. The staff at Apple was like a second family to him and he loved them all. Darryl enjoyed hunting and going to his cabin in Biglerville, he was a very talented man and loved working with wood making special pieces that he gave away to his friends. He was an avid train collector and a big Disney Maniac; a member of the UAW, he had a variety of interest and was a collector of many things, a big sports fan of the Dallas Cowboys, New York Yankees and Penn State sports. He loved watching old western movies, especially those with John “The Duke” Wayne playing in the. Darryl will be missed at Christmas when he played Santa for Apple Chevrolet and for close friends. It never mattered where he traveled, near or far, he would always meet up with someone that he knew and he was a very outgoing person, if he did not know you, you were his friend before you parted ways. Darryl served his country in the United States Army, during the Vietnam War and was a servant of his Lord everyday sharing his kind, loving, and giving personality with everyone he met, spreading positivity in a world that really needs it. Besides his loving wife, Margaret, Darryl leaves a daughter, Rachel B. Rosado and her husband John S. of York and a grandson, James M. Long, III of York. He also leaves his beloved Pug dog, Buddy. He was preceded in death by his only sister, Caroline J. Weitkamp. Family and friends are invited to share condolences during a viewing, on Thursday, August 19th, from 6-8 pm and Friday, August 20th, from 10-11 am at Burg Funeral Home, Inc., 134 W. Broadway, Red Lion. A Service of Honor and Praise for Darryl will be on Friday, at 11 am at the funeral home, with Rev. Marion Haynes-Weller officiating. Burial will follow the service at Windsor Cemetery, with full military rites offered by the York County Veterans Honor Guard. Flowers are welcomed, or you may offer contributions in Memory of Darryl to:https://www.gofundme.com/f/9g6daq-help-margaret-knisely-with-lawyer-costs?member=13269775&sharetype=teams&utm_campaign=p_na+share-sheet&utm_medium=copy_link&utm_source=customer Online condolences may be offered at: www.BurgFuneralHome.com

Darryl E. Knisely, of York, took the hand of his Lord and Savior on Thursday, August 12, 2021, after a vehicle accident at 1:56 pm at the age of 75. He was the loving husband of Margaret L. (Busler) Knisely, of York, to whom he married on September... View Obituary & Service Information

The family of Darryl E. Knisely created this Life Tributes page to make it easy to share your memories.

Darryl E. Knisely, of York, took the hand of his Lord and Savior...

Send flowers to the Knisely family.