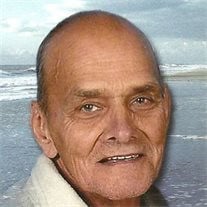 David A. Eveler, 70, went home to be with his Lord and Savior after a brief illness at 9:55 a.m. Thursday, May 2, 2013 at his residence. He was the husband of Gale L. (Seaks) Eveler. He was born in York, on January 21, 1943, and was the son of the late Wilbur Jennings and Elizabeth Ann (Ahrens) Eveler. David worked for the former York International as an electrician, retiring in 2001 after 35 years of service. He was a United States Army Veteran, having served during the Vietnam War. He was a longtime member of Pleasant Grove United Methodist Church in Red Lion, a former member of the Dallastown American Legion/VVNW, and a member of Red Lion American Legion Post #543, Collinsville Fish and Game, and National Rifle Association. In addition to his wife, Gale, he is survived by three sons, Todd D. Eveler of Glen Rock and his fiancee, Sharon Shaffer, Troy A. Eveler of York, and Trent E. Eveler and wife, Wendy of Wrightsville; one daughter, Tammy L. Waltemyer and husband, Robert of Windsor; six granchildren; one great-grandson; two brothers, Wilbur J. Eveler of Red Lion and William Eveler of Winterstown; four sisters, Nancy Yohe of York, Bonnie Brown of Florida, and Judy King and Wendy Paules, both of Windsor; and numerous nieces and nephews. He was preceded in death by a sister, Gladys King; and two brothers, Robert Eveler and Randy Eveler. Viewings will be held Monday from 6 to 8 p.m. and Tuesday from 10 to 11 a.m. at Burg Funeral Home, Inc., 134 W. Broadway, Red Lion. The service will begin at 11 a.m. Tuesday at the funeral home with his pastor, Phyllis A. Hunter, officiating. Burial will be at Susquehanna Memorial Gardens with full military rites by Dallastown American Legion Post #605. In lieu of flowers, contributions may be offered to York Health Foundation, Cancer Patient Help Fund, 912 S. George St., York, PA 17403. David was a wonderful, loving husband to Gale whom he married on January 6, 1965, celebrating 48 great years together. He was the best father and grandfather. His family was very important to him and the bond they all shared will never be broken. He was an avid hunter and enjoyed fishing. He loved his Lord and Savior. We'll miss you greatly, until we meet again, your loving family and friends. Online condolences may be made at www.BurgFuneralHome.com . .

The family of David A. Eveler created this Life Tributes page to make it easy to share your memories.

Send flowers to the A. Eveler family.