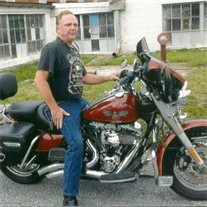 FELTON David "Birdman" W. Hines entered into eternal rest unexpectedly on Thursday, June 11th at 10:27 a.m. after the result of a motorcycle accident in Windsor at the age of 60. He was the husband of Barbara "Barbie" G. (Barsovitz) Hines of Felton. Dave was born on April 24, 1955, and is the son of Elbert H. Hines of York and the late Audrey G. (Smith) Hines. He was self-employed. He loved scuba diving, oyster diving and was a welder, fisherman, and tour guide. He was a member of the Red Lion American Legion #543, a social member of the Red Lion VFW #1446 and rider, a member of the Sons of American Legion in Red Lion Club #543 and the Lancaster County Sportsman Association. He was the owner of the former Birds R Us in Felton and was a Patriot Guard Rider. Surviving besides his wife Barb are two sons, Dwayne Hines and Bradley Hines, both of Georgia; a brother, Michael Hines of Clayton, Del.; two sisters, Susan Weisman of Felton and Kimberly Daryman of Red Lion; numerous nieces, nephews, aunts, uncles, cousins and many friends; and his Blue and Gold Macaw, Shewey. There will be no viewing. Family and friends are invited to extend their condolences on Tuesday, June 16 from 6 to 8 p.m. and Wednesday, June 17 from 9 to 10 a.m. at Burg Funeral Home, Inc., 134 W. Broadway, Red Lion. A Service of Honor and Praise for Birdman will begin at 10 a.m. at the funeral home. Pastor Tom T. Adinolfi, of Iron Horse Biker Church in Red Lion, will officiate. Burial will be in Bel Air Memorial Gardens in Bel Air, Md. In lieu of flowers, contributions may be offered to a favorite Veteran's Organization of your choice in memory of Birdman. Dave "Birdman" was a wonderful husband to Barbie, whom he married on September 26, 2004. He shared the love of the water with his late mother, who also enjoyed the ocean, boating, being at the beach. He had a very BIG HEART, and would do anything for anyone who needed something. He would always put the needs of others before his own. His family came first and riding his Harley was his passion. He will be greatly missed by all who knew and loved him. The family has requested those attending the services to please dress casually in jeans and t-shirts of the beach or Harley Davidson. Online condolences may be offered at www.BurgFuneralHome.com

FELTON David "Birdman" W. Hines entered into eternal rest unexpectedly on Thursday, June 11th at 10:27 a.m. after the result of a motorcycle accident in Windsor at the age of 60. He was the husband of Barbara "Barbie" G. (Barsovitz) Hines... View Obituary & Service Information

The family of David W. "Birdman" Hines created this Life Tributes page to make it easy to share your memories.