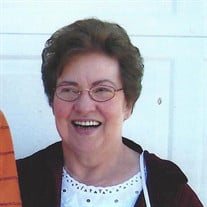 Delores A. (Taylor) Tyson, of York, entered into God’s care on Tuesday, August 6, 2019 at 11:50 pm at Spirtrust Lutheran Home in York at the age of 87. She was the wife of the late Willis R. Tyson who entered into rest on August 12, 2015. She was born in Brogue, on December 22, 1931 and was the daughter of the late Oliver V. and Emma M. (Arnold) Taylor. Delores worked at Gichner’s as an inspector, retiring after many years of service. She also provided in home personal care to others up to age 80. She was a longtime member of Genesis Church in York New Salem and she enjoyed spending time with her family. She leaves two children, Christine Y. Druck and her husband David of Airville and Wade F. Tyson of Brogue; three grandchildren, Kelly Tyson of Red Lion, Jesse Druck (Barb) of Airville, Michael Druck (Erica) of Airville and four great grandchildren; Isiah Druck, Beckett Druck, Copley Druck and Dakoda Bonawitz . She has five siblings, Elmo Taylor of Brogue, Nancy Grove of Red Lion, Sam Taylor of Brogue, Geraldin King of Red Lion and Joe Taylor of North Carolina along with numerous nieces and nephews. She was preceded in death by a daughter, Gina D. Tyson, who entered into rest on July 15, 1974, and a brother, Donnell Taylor. Viewing will be on Sunday, August 11th from 6-8 pm at Burg Funeral Home, Inc., 134 W. Broadway, Red Lion, and on Monday, August 12th from 10-11 am at the funeral home. A Service of Honor and Praise for Delores will begin at 11 am, with Pastor Greg Thomas officiating. Burial will be in McKendree UM Cemetery, following the service. In lieu of flowers, contributions may be offered to: McKendree Cemetery Association, c/o Melissa Druck, 207 E. Posey Road, Airville, PA 17302, or to ASANA Hospice, 4813 Jonestown Road, Ste. 201, Harrisburg, PA 17109. www.BurgFuneralHome.com

The family of Delores A. (Taylor) Tyson created this Life Tributes page to make it easy to share your memories.

Delores A. (Taylor) Tyson, of York, entered into God’s care on...

Send flowers to the Tyson family.