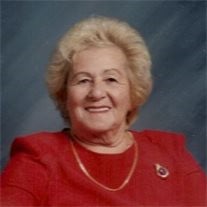 Delores M. (Wise) Shoff, formerly of Dallastown, danced her way through the pearly gates on Friday, Aug. 21, 2015, at 1:30 p.m. at Country Meadows at Leader Heights at the age of 90. She was the wife of the late Dale G. Shoff, who entered into rest in 1992. Delores was born in Fawn Grove on September 4, 1924, and was the daughter of the late S. Norris and Edna M. (Baker) Wise. Delores worked as a Bookkeeper, her last job was with AAA and in the office of Mr. Grumbacher at the Bon Ton Store in downtown York. She was a member of Christ Lutheran Church in Dallastown; American Legion Post #605 Dallastown Ladies Auxiliary since 1963; a former Girl Scout Leader and she was a Den Mother with the cub scouts. She was very faithful in going to the YMCA where she enjoyed swimming. She was a graduate of the Red Lion High School Class of 1942 where she was an honor student, played Trumpet and Baritone in the Band. Survivors include two sons, Darryl F. Shoff and his wife Susanne of Fort Myers, Fla., Douglas M. Shoff and his wife Dawn of New Cumberland; and a daughter, Diane A. Sunday of Dallastown; six grandchildren, Kevin D. Sunday of Mechanicsburg, Donald C. Sunday of Kansas, Kelsey D. Sunday of Dallastown, Michael J. Waltman of Windsor, Gillian R. Shoff and Sheridan R. Shoff, both of Manchester; and nieces and nephews. She was preceded in death by a brother, John Q. Wise. There will be no viewing. Cremation will take place with Burg Funeral Home, Inc., 134 W. Broadway, Red Lion. A Memorial Service of Honor and Praise for Delores will be on Sat., Aug. 29 at 3 p.m. in the Chapel at Country Meadows of Leader Heights, 2760 Pine Grove Road, York. A time of fellowship with the family will follow the service. The Rev. Dr. Dennis Hamsher, chaplain of Country Meadows of York, will officiate. Burial will be private and at the convenience of the family. In lieu of flowers, contributions may be offered to; Alzheimer's Association GPA, 3544 N. Progress Ave., Suite 205, Harrisburg, PA. 17110; or to the York County SPCA, 3159 Susquehanna Trail North, York, PA 17406. Delores was everyone's mother and always put her family first. Spending time together was a great joy to her. She was a very determined lady and knew how she liked things done. She loved music and dancing. We'll miss you dearly, until we meet again. Online condolences may be offered at www.BurgFuneralHome.com -

Delores M. (Wise) Shoff, formerly of Dallastown, danced her way through the pearly gates on Friday, Aug. 21, 2015, at 1:30 p.m. at Country Meadows at Leader Heights at the age of 90. She was the wife of the late Dale G. Shoff, who entered... View Obituary & Service Information

The family of Delores M. (Wise) Shoff created this Life Tributes page to make it easy to share your memories.